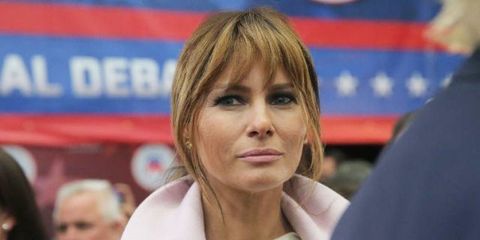 Melania Trump on Monday described her husband's remarks from the set of Access Hollywood—where he bragged about sexually assaulting women—as "boy talk" and suggested he was "egged on" by the show's host, Billy Bush.

In an interview with CNN's Anderson Cooper, which is scheduled to air on Monday night, Melania said:

"I, I said to my husband that you know the language was unappropriate (sic). It's not acceptable and I was surprised, because that is not the man that I know. And as you can see from the tape, the cameras were not on. It was only a mic. And I wonder if they even knew that the mic was on. Because they were kind of, ah, boy talk. And he was lead on. Like egg on from the host to say uh dirty and bad stuff."

The "bad and dirty stuff" to which she refers is the behind-the-scenes video from Access Hollywood that The Washington Post published nearly two weeks ago. In the video, Trump refers to kissing and groping women without their consent.

The day after the tape emerged, Melania issued a statement saying the words her husband used are "unacceptable and offensive to me."

In her interview with CNN, a portion of which the network released on Monday, Melania said the remarks don't represent the man she knows. Cooper asked Melania whether she'd heard her husband use that type of language before.

"No, no that's why I was surprised," she responded. "Because I said like I don't know that person that would talk that way. And that he would say that kind of stuff in private. I've heard many different stuff, boys talk. I—the boys, the way they talk when they grow up and they want to sometimes show each other 'oh this and that' and talking about the girls and, but I was surprised, of course."

In the days since the tape went public, numerous women have come forward saying Donald Trump sexually assaulted them. Trump has denied those allegations.

In a second interview on Monday with Fox News's Ainsley Earhardt, which is scheduled to air Tuesday morning, Melania also said it's fair game for the media and her husband's campaign to bring up Bill Clinton's infidelities because her past as a model has been brought up by some media outlets.

"They're asking for it. They started," she told Fox News, according to an excerpt the network released Monday night. "They started from the—from the beginning of the campaign putting my—my picture from modeling days. That was my modeling days and I'm proud what I did. I worked very hard."

Earlier this year, the New York Post published nude photos of Melania from her modeling days in the '90s. And, as Politico points out, a pro-Ted Cruz super PAC put out an ad with a nude picture of Melania from a British GQ shoot in 2000.

The CNN and Fox News interviews mark Melania's interview first since both the Access Hollywood tape and the accusations of sexual assault have emerged.