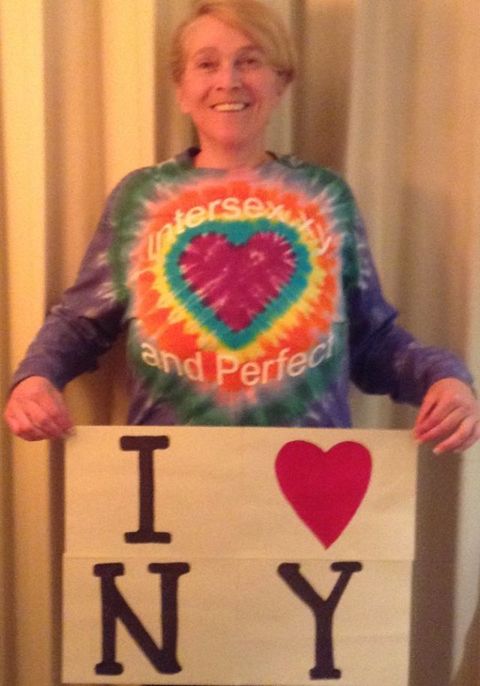 Sara Kelly Keenan was born intersex, with male genes and female genitalia—but it took more than half a century for her birth certificate to reflect her true identity. This week, the 55-year-old was issued the first-known American birth certificate to read "intersex" instead of "male" or "female." Keenan, who uses female pronouns, celebrated with a Facebook photo of herself wearing a tie-dyed shirt reading, "Intersexxy and perfect."

Keenan is the latest example of a movement of people petitioning the government to have a third gender recognized legally. Earlier this year, Jamie Shupe became the first to receive permission to change their listed gender as non-binary. And, according to NBC, that success has caused a ripple effect, with the amount of people petitioning the courts for a third gender designation increasing exponentially.

"Not all intersex people will choose to identify legally as intersex," Keenan told NBC Out, "and not all parents will choose to have their intersex child identified as intersex on birth documents. But for those who do, the option must exist."

Keenan was born with male genes, female genitalia and mixed internal reproductive organs, according to NBC Out. When she was born in New York City in the '60s, her parents and doctors agreed to keep the fact that she was intersex a secret and marked her as a boy on her birth certificate. Then, three weeks later, she was issued a female birth certificate. When she was 16, Keenan began hormone replacement therapy after being informed that she was "a girl that can't make hormones."

Keenan's new birth certificate is a historic change. Without an intersex distinction, it has always been required that every person be shuffled into a strict male or female categorization upon birth. According to the NBC Out report, there has been one other American birth certificate marked "hermaphrodite" and several with no gender specified.

"The Health Department has interpreted our gender marker rule to mean that a person may amend their birth certificate to have 'intersex' reflected on their birth certificate with appropriate documentary evidence from a U.S.-licensed doctor," Department of Health and Mental Hygiene Assistant Press Secretary Julien A. Martinez told the outlet. "The Department will continue to work with community partners as we adopt changes to more accurately reflect a person's sex."

Of finally seeing her true identity reflected on her birth certificate, Keenan said: "It is both shocking and empowering."

Kate Storey Esquire Writer-at-Large Kate Storey is a Writer-at-Large for Esquire covering culture, politics, and style.
This content is created and maintained by a third party, and imported onto this page to help users provide their email addresses. You may be able to find more information about this and similar content at piano.io
Advertisement - Continue Reading Below
More From Politics
A Debate Coach Grades Final Presidential Debate
A Guide to Celebrity Presidential Endorsements
Advertisement - Continue Reading Below
Twitter Has Thoughts On the Presidential Debate
Can You Vote Online in the 2020 Election?
What's at Stake for Abortion in the 2020 Election
Just 25 Celebrities Doing Their Civic Duty
Donald Trump's Twitter Was Hacked
Kristen Welker Is Moderating the Third Debate
The Swing States We Need to Pay Attention to Now
Your Guide to the 2020 Presidential Debates