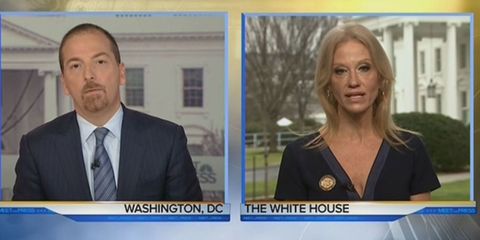 The latest confusing doublespeak to come out of the Trump Administration was spoken by Donald Trump's former campaign manager Kellyanne Conway on Sunday's Meet the Press.

On the show, Conway discussed press secretary Sean Spicer's first briefing from the White House during which he lied at least four times, according to PolitiFact, about the number of people who attended the Trump inauguration and accused the media of distorting the true attendance numbers.

Host Chuck Todd questioned Spicer's remarks and visibly confused when Conway justified his statements by saying he was merely providing "alternative facts" to the media.

"Why did he do that? It undermines the credibility of the entire White House press office on day one," Chuck Todd asked Conway.

"Don't be so overly dramatic about it, Chuck... You're saying it's a falsehood... Sean Spicer, our press secretary, gave alternative facts to that," Conway fired back.

Conway still didn't give a straight answer, but instead pivoted to a new topic, leaving Todd (and many viewers) disappointed.