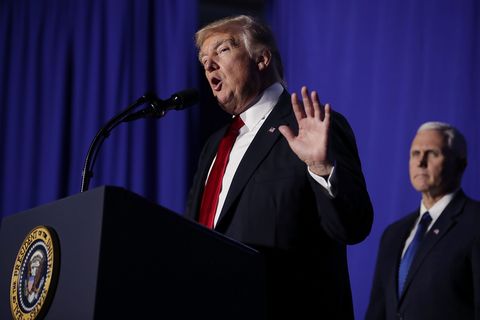 President Donald Trump, who deferred the draft a total of five times, declared Wednesday he believes torture works as his administration readied a sweeping review of how America conducts the war on terror. It includes possible resumption of banned interrogation methods and reopening CIA-run "black site" prisons outside the United States.

In an interview with ABC News, Trump said he would wage war against Islamic State militants with the singular goal of keeping the U.S. safe. Asked specifically about the simulated drowning technique known as waterboarding, Trump cited the extremist group's atrocities against Christians and others and said: "We have to fight fire with fire."

Trump said he would consult with new Defense Secretary James Mattis and CIA Director Mike Pompeo before authorizing any new policy. But he said he had asked top intelligence officials in the past day: "Does torture work?"

"And the answer was yes, absolutely," Trump said.

He added that he wants to do "everything within the bounds of what you're allowed to do legally."

A clip of Trump's interview was released after The Associated Press and other news outlets obtained copies of a draft executive order being circulated within his administration.

Beyond reviewing interrogation techniques and facilities, the draft order would instruct the Pentagon to send newly captured "enemy combatants" to Guantanamo Bay, Cuba, instead of closing the detention facility as President Barack Obama had wanted. Altogether, the possible changes could mark a dramatic return to how the Bush administration waged its campaign against al-Qaida and other extremist groups.

Trump spokesman Sean Spicer, questioned about the draft order, said it was "not a White House document" but would not comment further.

The draft says U.S. laws should be obeyed at all times and explicitly rejects "torture." But its reconsideration of the harsh techniques banned by Obama and Congress raises questions about the definition of the word and is sure to inflame passions in the U.S. and abroad.

After the Sept. 11, 2001, attacks, President George W. Bush authorized a covert program that led to dozens of detainees being held in secret locations overseas and to interrogation tactics that included sleep deprivation, slapping and slamming against walls, confinement in small boxes, prolonged isolation and even death threats. Three detainees faced waterboarding. Many developed psychological problems.

While some former government leaders insist the program was effective in obtaining critical intelligence, many others say the abuses weakened America's moral standing in the world, hurt morale among intelligence officers and proved ineffective before Obama shut it down.

The AP obtained the draft order from a U.S. official, who said it had been distributed by the White House for consultations before Trump signs it. The official wasn't authorized to speak publicly on the matter and demanded anonymity.

The Pentagon didn't immediately comment and Spicer, Trump's press secretary, said: "I have no idea where it came from." But reports of the upcoming order quickly sparked alarm among Republicans and Democrats.

"The president can sign whatever executive orders he likes. But the law is the law," said Republican Sen. John McCain, tortured himself as a prisoner during the Vietnam War. "We are not bringing back torture in the United States of America."

On the campaign trail, Trump spoke emphatically about toughening the U.S. approach to fighting the Islamic State group. He said he would authorize waterboarding and a "hell of a lot worse." After winning the election, however, he appeared to backtrack, pointedly citing Mattis' advice that torture is ineffective.

Pompeo, Trump's CIA director, said in his confirmation hearing that he would abide by all laws. But he also said he'd consult with CIA and other government experts on whether current restrictions were an "impediment to gathering vital intelligence to protect the country or whether any rewrite of the Army Field Manual is needed."

Trump's draft would reverse two other executive orders of Obama's. One called for closing Guantanamo Bay. The other ordered the CIA to shut any detention facility it operated and prohibited the U.S. from using any interrogation technique not listed in the Army Field Manual, demanding treatment in compliance with the Geneva Conventions, including timely access for the International Red Cross to all detainees.

Any changes would face steep legal and legislative hurdles.

McCain, the Senate Armed Services Committee's chairman, may be the most formidable opponent in Congress, but he is not the only one.

"It is wrong and I hope he will rethink it," House Democratic Leader Nancy Pelosi said.

On Guantanamo, the draft order says detention facilities "are a critical tool in the fight against international jihadist terrorist groups who are engaged in armed conflict with the United States, its allies and its coalition partners." About 40 detainees remain in Guantanamo.

The document says "over 30 percent of detainees" who've been released have returned to armed conflict, with at least a dozen conducting attacks "against U.S. personnel or allied forces in Afghanistan." Six Americans, including a civilian aid worker, died as a result of those attacks.

U.S. intelligence agencies say 17.6 percent of detainees released from Guantanamo are confirmed to have re-engaged in conflict. An additional 12.4 percent are "suspected" of re-engaging.

Trump pledged on the campaign trail to "load it up with some bad dudes."

But it's unclear who the new detainees would be. As American ground troops have stepped back this decade from the front lines in Iraq and Afghanistan, captures of high-level detainees have become much rarer, and Obama tried to direct them through the U.S. justice system.