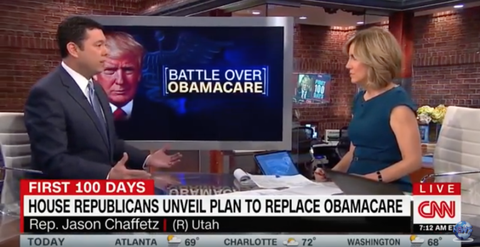 The House Republicans released their healthcare plan Monday evening, so this morning it was time to hastily defend it. Here come the paeans to fiscal responsibility and, of course, condescending explanations of why people who can't afford healthcare are just morally deficient and haven't taken control of their own lives. Jason Chaffetz, congressman from Utah, jumped on CNN to offer that maybe people were blowing all their health insurance cash on iPhones:

Of course, Mr. Chaffetz won't have to choose between that shiny new iPhone and a health insurance policy that will protect him from going bankrupt if he is hit with a serious medical condition. He has healthcare subsidized by taxpayers, and makes $174,000 a year. (President Obama once referenced a "cable bill" and "cell phone bill" in discussing how some Americans may not "prioritize healthcare because right now everybody's healthy." That, too, seems a bit much: Someone should be able to have a cell phone and go to the doctor in the world's wealthiest nation.)

Meanwhile, Chaffetz's unhinged colleagues in the House Freedom Caucus are railing against their own party's proposal, saying it doesn't go far enough in wiping Obamacare off the face of the Earth. Rep. Jim Jordan told The Atlantic the plan was "Obamacare 2.0," and complained about its failure to repeal the Medicaid expansion and its suggestion of refundable tax credits to help people buy insurance.

At least Chaffetz is feeling the burn.

On Fox News, @jasoninthehouse just said that his iPhone comment wasn't made "as smoothly" as he could have.