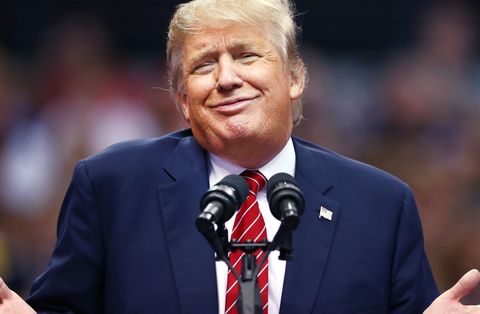 Donald Trump might be done tweeting and deleting—at least if he listens to Congress. This weeks, two members of Congress sent the White House a letter warning them that Trump and his staff might be violating federal law when they delete tweets from the president's official accounts, according to Teen Vogue.

The letter (which is available to read in full here) warns that tweets from both the @realDonaldTrump and the official @POTUS accounts "are likely to be presidential records and therefore must be preserved." If those deleted tweets aren't archived, then Trump and his staff could be violating the Presidential Records Act.

Trump infamously deleted a tweet less than 24 hours after taking office, when he misspelled "honored" and has tweeted and deleted after similar errors since.

Kayleigh Roberts Kayleigh Roberts is the weekend editor at Marie Claire, covering celebrity and entertainment news, from actual royals like Kate Middleton and Meghan Markle to Hollywood royalty, like Katie Holmes and Chrissy Teigen.
This content is created and maintained by a third party, and imported onto this page to help users provide their email addresses. You may be able to find more information about this and similar content at piano.io
Advertisement - Continue Reading Below
More From Politics
A Valedictorian Speaks Out Against Abortion Bans
Standing Between Care and Violence
Advertisement - Continue Reading Below
Seeking Healing a Century After the Tulsa Massacre
What to Know about Texas's Abortion "Trigger Ban"
A New Book Invites Us to Rethink Menstrual Equity
We Must Remember George Floyd's Legacy
This Is How Much Joe Biden Is Worth
Joe Biden's Granddaughter Is His Biggest Fan
Watch Katie Porter Destroy a Big Pharma Exec
SCOTUS Will Hear a Major Abortion Case