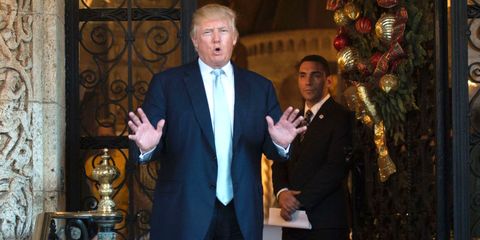 Since his inauguration, Donald Trump has traveled to his Palm Beach estate and private club, Mar-a-Lago, four times. He'll be back there this weekend and again next month—if not before—when he hosts Chinese President Xi Jinping.

Each trip reportedly costs taxpayers approximately $3 million, and while the president has taken time off to golf near his Florida retreat, he's also tackled work obligations. Here's everything that's happened during Trump's visits to the so-called "winter White House."

President Trump visited St. Andrews Catholic School in Pine Hills, where he discussed education reform, before traveling to Mar-a-Lago on Friday. He spent Friday evening at an event for Republican donors at the nearby Four Seasons hotel, where a group of about two dozen protested from across the street. At least one protester was reportedly arrested and another was detained.

On Saturday afternoon, about two dozen protesters "exchanged profanities" with a crowd of about 100 Trump supporters near Mar-a-Lago, according to the Associated Press. The president stopped his motorcade and waved to the crowd on his way back to the club (above).

That night, while the Bascom Palmer Eye Institute held a gala with 300 attendees in the club's ballroom, the president mingled with guests and members. He also reportedly had dinner with Attorney General Jeff Sessions, Commerce Secretary Wilbur Ross, Secretary of Homeland Security John Kelly, and White House counsel Don McGahn at the club that evening.

Trump walks off Air Force One at Palm Beach International Airport on his way to Mar-a-Lago on February 17.

The president traveled to Palm Beach on the Friday of Presidents' Weekend, and then held a campaign-style rally at the Orlando Melbourne International Airport on Saturday morning.

Trump addresses a rally at the Orlando Melbourne International Airport on February 18.

On Sunday, the president played a round with pro golfer Rory McIlroy at the Trump International Golf Club. Trump, who was critical of former President Obama's golf excursions, was criticized after what spokesperson Sarah Huckabee Sanders described as "a couple of holes this morning" was revealed to be 18 holes. (Sanders later said the president "intended to play a few holes and decided to play longer" and "also had a full day of meetings, calls and interviews" for the new national security advisor, following Michael Flynn's resignation after it was revealed that he had misled Vice President Mike Pence and other top White House officials about his conversations with the Russian ambassador to the United States.)

Trump arrived at Mar-a-Lago with Japanese Prime Minister Shinzo Abe on Friday evening, and the two of them had dinner with their wives at the club that night.

On Saturday night, a national security crisis erupted. Following North Korea's launch of a test missile toward the sea of Japan, members and guests at Mar-a-Lago were treated to front-row seats as Trump and Abe reacted to the international incident.

Abe, Trump, and their aides react to the firing of a test missile by North Korea on the terrace of Mar-a-Lago.

After holding a brief press conference, Trump stopped by a wedding taking place in the 20,000-square-foot ballroom that added when he turned Mar-a-Lago into a private club in 1995.

During his first trip to Mar-a-Lago as president, Donald Trump attended the 60th annual Red Cross Ball on Saturday night. Outside the club walls, a group of more than 3,000 protesters marched with signs that read "Climate Change Is Real," "I stand with my Muslim neighbors," and "My Body My Choice," among other phrases, the Sun-Sentinel reports.

The march began at the Trump Plaza condominiums in West Palm Beach, and despite reports that police would shut down the path to Mar-a-Lago at Bingham Island, preventing protesters from making it onto the island of Palm Beach, the group was allowed to gather in front of Mar-a-Lago until about 8 p.m.

President Trump—who reportedly spent Saturday morning playing golf—celebrated the Red Cross Ball along with eight foreign ambassadors to the United States, several American ambassadors, and "nobility from England, France, and Italy," according to the Palm Beach Daily News. The ball's theme was "From Vienna to Versailles," and Mar-a-Lago was decked out "in Old World 18th-century style, right down to the service staff in powdered wigs and satin knee breeches or Marie Antoinette dresses."