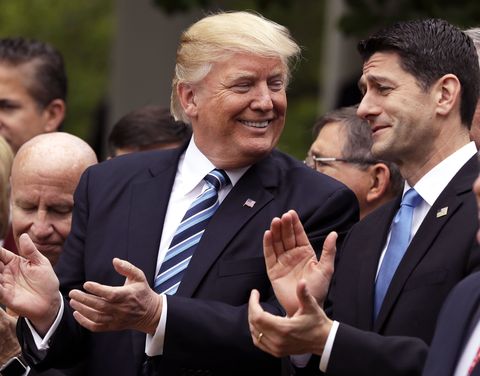 If it feels like the House of Representatives just tried to vote on repealing and replacing Obamacare, it did. In late March, the legislation known officially as the American Health Care Act (AHCA) and colloquially as Trumpcare failed due to a division within the Republican party. Today, the Republicans tried again—and succeeded in the first step of toppling Obamacare.

The AHCA passed the House by four votes, with every single Democrat voting against it. Prominent Republican leaders have already taken to Twitter to celebrate their victory.

The bill would eliminate the tax penalties for people who don't buy coverage, and it erases tax increases in the Affordable Care Act on higher-earning people and the health industry. It cuts the Medicaid program for low-income people and lets states impose work requirements on Medicaid recipients.

But states could get federal waivers freeing insurers from other Obama coverage requirements. With waivers, insurers could charge people with pre-existing illnesses far higher rates than healthy customers, boost prices for older consumers to whatever they wish and ignore the mandate that they cover specified services like pregnancy care.

The bill would also block federal payments to Planned Parenthood for a year, considered a triumph by many anti-abortion Republicans.

Within minutes of the vote, healthcare groups across the country issued statements in response. "This is the worst bill for women's health in a generation," said Cecile Richards, the president of Planned Parenthood. "In short, this bill makes it harder to prevent unintended pregnancy, harder to have a healthy pregnancy, and harder to raise a family. Alarm bells should be ringing in every house across America."

"Trump's plan is dangerous for women's health and our ability to make decisions about our futures and our families," said Nancy Northup, the CEO of the Center for Reproductive Rights. "From gutting maternity coverage to blocking women from getting health care at Planned Parenthood to eliminating guaranteed coverage for those with pre-existing conditions, the measure passed today will drive health care out of reach for millions."

Of course, the reform is hardly a done deal. The Senate will vote next, and the bill isn't expected to pass there easily. Twelve Republican senators have already expressed their concern over this version of Trumpcare, including big names like Ted Cruz, Rand Paul, and John McCain, and only three nays would be enough to kill it.

The vote likely won't be held for several more weeks, which means senatorial staffers better clear their schedules. They're about to field a whole bunch of phone calls from constituents.

Kaitlin Menza Kaitlin Menza is a freelance features writer.
Advertisement - Continue Reading Below
More From Politics
Marie Claire Wants You to Vote
The Ecowarriors Greenifying Big Tech
Advertisement - Continue Reading Below
Who Is Andrew Cuomo's Ex-Wife Kerry Kennedy?
How Planned Parenthood Is Responding to COVID-19
British PM Boris Johnson Has Coronavirus
Fear Is a Virus
COVID-19 Exposes the Dangers of Gender Inequality
“I’m Homeless—How Can I Self-Quarantine?”
Will the Conventions Be Canceled in 2020?
Rep. Katie Porter on Being an Effective Politician