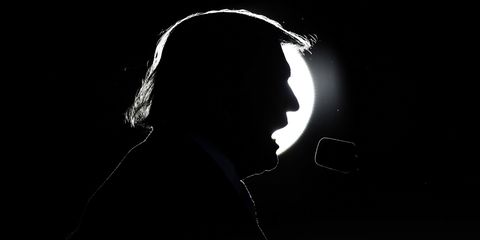 The image is now iconic: a group of old white men stand at a podium, announcing that a healthcare bill that disproportionately hurts women has passed the House. The men include a beaming Mike Pence, who once signed a law forcing women to bury or cremate aborted fetuses, and President Trump, who has been accused of sexual assault by at least 13 women, and, lest we forget, once bragged about his ability to "grab" women "by the pussy" on tape.

All thirteen of the members who designed this bill were men. And while the legislation has the potential to hurt every American, many of its stipulations are explicitly designed to render women unable to acquire basic care. If the new bill is signed into law, rape and sexual assault—far more common among women than men—could be considered pre-existing conditions by the federal government. For women who let their insurance lapse, maternity coverage will no longer be guaranteed, and pregnant women may face surcharges up to $17,000 for care. C-sections could also be considered a pre-existing condition, meaning that a woman could incur costs of roughly $50,000 for simply wanting another child. States could determine that having a heavy period or other menstrual irregularities is a pre-existing condition to be paid for out of pocket.

Erectile dysfunction, at the moment, is still covered.

It is not surprising that no women were involved in the creation of the healthcare bill. Women currently comprise only 19.4% of the House, are in no senior cabinet positions, and remain a minority in every branch of government and most sectors of public influence, like business, media, and technology. To be clear, this gender imbalance existed under the Obama administration and all others before it; half of the population being represented by a fragment is nothing new. The difference is that prior administrations were not fledgling kleptocratic autocracies whose primary opponents are female citizens.

"Repressing women is a characteristic aspect of authoritarian rule. It's meant to frighten us into disillusionment and compliance."

Since taking office, Trump has displayed the signature traits of an aspiring autocrat: disregard for the constitution, the installation of unqualified family members in high-level positions, the abuse of executive power to enhance personal wealth, the scapegoating of ethnic minorities, and ongoing threats to free speech, free media, and public protest. His rule has been a continual test of checks and balances, and his biggest check, arguably, has been women.

The healthcare law is not only a sadistic assault on the sick and vulnerable, but a gendered attack meant to render his most forceful opponents, American women, helpless. Autocracy and patriarchy often go hand in hand; the countries with the highest levels of political freedom in general tend to prioritize women's healthcare, education, and other basic rights.

The U.S. has always been an exception to this rule. We rank last among developed countries for maternity leave, and women's participation in government plunged between 1997, when it was ranked 52nd in the world, and 2016, when it fell to 97th. Trump and his administration, in both denying women affordable healthcare and reducing the number of women in power, are taking advantage of those trends and exploiting them for political gain.

And American women know it. Since Trump took power, protests against his administration have consisted overwhelmingly of women. According to sociologist Dana Fisher, women didn't just account for "the vast majority" of Women's March participants, but also more than half of the March for Science and People's Climate March participants. Most of the people using the tool Daily Action to complain to their representatives about Trump have been women. Trump's January Muslim travel ban was struck down by four female judges. The Acting US Attorney General, Sally Yates, was fired after she protested the ban, and has since been a major player in the investigation into Russian election interference, along with outspoken congresswomen like Maxine Waters. This year, over 11,000 women told the pro-choice political advocacy group Emily's List that they want to run for Congress, compared to only 900 last year.

Women, in other words, are a huge problem for the Trump administration. Unable to silence our voices, they've turned to controlling our bodies—and repressing women, whether through biology or social structures, is a characteristic aspect of authoritarian rule. It's meant to frighten us into disillusionment and compliance. When survival becomes our primary objective—when anger about willful denial of climate change is overshadowed by the more urgent need to pay for a critical doctor's appointment—it's harder to organize, protest, run for office, or generally fight back. Instead, we have to live.

"It's a classic authoritarian tell: They see their political dominance as a lock."

Trumpcare is wildly unpopular, an unsurprising fact since millions may die if it replaces Obamacare. What is surprising is that the GOP is attempting to pass this bill—and even gloat about it—with seemingly no regard for its repercussions on their party.

Republicans behave as if they do not expect the 2018 elections to be free and fair, which is a horrifically reasonable assumption given the acceleration of voter suppression after the 2013 partial repeal of the Voting Rights Act, the appointment of civil rights antagonist Jeff Sessions as Attorney General, Trump's rhetoric about "illegal" votes in minority-heavy California, widespread gerrymandering, and the ongoing threat of Russian interference with possible Trump staffer collusion, among other factors. When representatives flaunt their disregard for public will this blatantly, they insinuate that public will is irrelevant. It's a classic authoritarian tell: They see their political dominance as a lock.

Targeting women's health is part of this administration's broader autocratic strategy to shut the opposition down. They want women weakened, desperate, and politically irrelevant as public frustration grows.

When the Senate decides whether to pass this bill, they will be holding a referendum not only on citizen health, but on women's freedom. Our future—as women and as a country—is at stake.

Sarah Kendzior is a reporter and writer with an academic background in authoritarian states. She's the author of the best-selling book View from Flyover Country. Follow her on Twitter here.