3
Fall Sweaters to Snuggle Up In
4
We Should Have Known About J.K. Rowling's Views
5
The Oral-B iO Toothbrush Replacing My Dentist RN
Getty

The newly elected President of France has addressed the international obsession with his wife's age. Emmanuel Macron has said misogyny and homophobia were to blame for the speculation that he cannot be in love with his wife, who is 24 years his senior.

Macron married his wife Brigitte Trogneaux in 2007, when he was 29 and she was 54. The couple's age gap is actually exactly the same as that of President Trump and his wife Melania, although the difference in their ages has received much less attention.

Macron went on to say that speculation regarding the assumptions about his relationship were down to "misogyny" and people ascribing to the "traditional, homogenous" views about society. He explained that people who believe such rumors—that he must truly be a homosexual and cannot really be in love with his wife—had "lost their sense of reality" and had a "big problem with homosexuality." He described it as "rampant homophobia" that people are accusing him of being gay, as if it is a "hidden disease."

"There is a big problem with the presentation of society and how they see the place of a woman," he added. 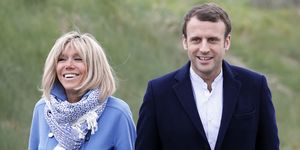