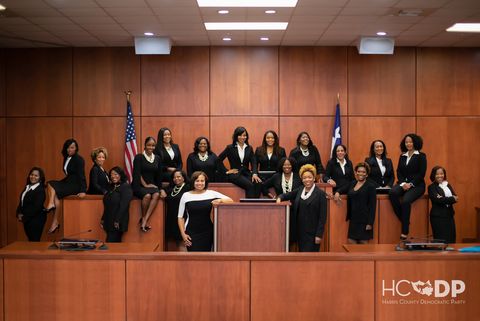 On November 6 last year, all eyes were on Texas as 19 black women made history as the largest number of female African Americans elected at one time to judicial seats in Harris County. In the aftermath of the record-setting victory, a photograph taken in August of the women gathered together at the Texas Southern University Thurgood Marshall School of Law, named for the first African American justice on the U.S. Supreme Court, quickly and gleefully spread across social-media platforms worldwide. “It was our wildest hope that the photo would go viral,” says Lillie Schechter, who chairs the Harris County Democratic Party. “And now in our office we’re still getting notes from people who have seen the post and say, ‘Thank you for trusting black women.’ It’s incredible.”

The striking image of the women—17 newly elected, two reelected—standing proudly and powerfully in a courtroom, a place where African Americans have long been underrepresented and disenfranchised, represents more than a milestone. It’s proof that black women, who have always been a key voting bloc for Democrats (94 percent of black women voted for Hillary Clinton in 2016), are finally getting not just one but many seats at the table. “If you look at the backbone of the country, the black woman has always been there but not necessarily given the opportunity to have input,” says Judge Erica Hughes, who used to run an insurance and criminal private practice and now presides over the county’s Criminal Court at Law No. 3. “Black women are taking a stand and saying, ‘We bring a lot of things to the table, and you should hear our voice. You’re going to hear our voice.’ ”

The coordinated effort began in March 2018, when many of the candidates left standing after the primaries realized they had something in common. “We all looked around and were just like, ‘What is happening here?’ ” says Judge Michelle Moore, who went on to win election for the 314th Juvenile District Court. “It was definitely a pleasant surprise that there were so many of us.” Party leaders wanted to do something to highlight all of the women running, so they launched a campaign called Harris County Black Girl Magic, inspired by CaShawn Thompson, who created #BlackGirlsAreMagic in 2013 to celebrate the power of black women. “It’s been a 10-year battle to take back the county—to make it more reflective of the people,” Schechter says. “And the only way we change the face of power here locally and statewide is by winning elections.”

When Judge Dedra Davis, an entertainment lawyer elected to the 270th Civil District Court, began campaigning, she says people never thought someone like her would be in the running. She took a cooler to basketball courts to offer players water and strike up a conversation about the election. “One of the things I heard over and over was ‘You’re telling us we should vote, but when we do, it’s one white man Republican and one white man Democrat. What difference does it make which white man I’m voting for?’ ” Davis says. “I would look them in the eyes and say, ‘Well, I’m not a man, I’m not white, and I’m running.…’ If you could see their faces!” Those conversations kept her motivated. “It was very empowering,” she adds. “People were feeling like their voice had power and that their vote had some legs behind it—that it could really make a difference.”

The system wasn’t going to change unless the judicial branch changed.

Making the judiciary more reflective of the population is a concern nationwide but especially in Harris County, where 43 percent of residents are Hispanic and 20 percent are black. (White people constitute 30 percent of the population.) The wins in November increased the number of black female judges from eight to 25 of the 75 elected judgeships. “Harris County is a great melting pot, but when you go into the courthouse, the judicial bench does not reflect that,” Hughes says of the county, the most populous in the state and home to Houston. “I practiced as a lawyer for 12 years, and it started to weigh on me. The system wasn’t going to change unless the judicial branch changed.”

The lack of representation has taken a toll. In May 2016, Harris County faced a class-action civil-rights lawsuit for its cash-bail system, which plaintiffs alleged discriminates against the poor, who are often held in jail on low-level offenses if they can’t pay. In February 2017, a federal judge issued a scathing ruling against the county, saying the bail policy violated the Constitution’s due-process and equal-protection clauses; a year later, the decision was upheld by the conservative 5th U.S. Circuit Court of Appeals. In January 2019, the new slate of judges approved a plan to overhaul the controversial system that, if approved by a federal judge, would see 85 percent of people arrested on misdemeanors automatically released on no-cash bonds. “People are going to see—already—some change,” Hughes says. “[We are] going to change the landscape of criminal justice.”

Moore, who formerly worked on child-protection issues as a lawyer in the county’s attorney’s office, set her sights on the 314th Juvenile District Court to similarly change the system. Her predecessor, Judge John Phillips, a Republican, was one of two judges responsible for one fifth of the children sent to the state’s juvenile prisons, about 96 percent of whom were children of color. “If there was any court that I wanted to win, it was that one because of the injustices that were done day in and day out,” says Moore. “I was fed up, I’d had enough, and I knew that I had to change it.” But when she told people about her plans, they would say, “Hey, Michelle, you sure you want to run for that court? You know what happened the last time someone ran against him?” says Moore. Phillips, ﬁrst elected in 2002, had previously easily won reelection. “My mind was blown. I’m thinking this is nothing but a man. What can he do? Yes, I’m running for the 314 court. Yes, I’m doing that.”

Hughes can relate. “People were not really supportive initially,” she says. “We had to put it in their face and say we’re here; we’re not going anywhere. And as it got closer to the end, people started to, I guess you could say, feel the Black Girl Magic.” Having other women candidates to lean on helped. “We formed a bond—a sisterhood—over the course of running,” she adds. “The great thing is you’re not alone. You have other women to call, to ask questions of, to give insight, to bounce ideas off of, and to feel like they’re going to cover you. It’s been a great reward to have a circle that you trust.” Sadly, one of the newly elected judges, Cassandra Holleman, died in February at age 57, a month into her term on County Criminal Court at Law No. 12 and one week after she was diagnosed with pancreatic cancer. “At least she was able to fulfill her dream before she died,” Davis says. (Genesis Draper was appointed to fill the seat until the next general election.)

Our ideas and the way we see the law, it changes everything in Harris County.

Together, the remaining judges will work in her honor on the county’s civil, criminal, family, and juvenile courts to make their presence known during their four-year terms. “Institutionalized racism is very entrenched. It’s on the bench, in the police force, school rooms—everywhere,” Davis says. “I’ll forever be working to make law and order equal.” Moore agrees. “What I’m really looking forward to is after a year or two, what has happened?” she says. “We have a fresh set of eyes and beliefs. How does that affect incarcerated people of color? What will it do to those numbers? Our ideas and the way we see the law, it changes everything in Harris County.”

This month, the county that was home to the record-setting, system-changing victory will make history yet again as the site of the ﬁrst-ever presidential forum focused on women of color, at Texas Southern University, the alma mater of former representative Barbara Jordan (D-Tex.), the first black woman elected to Congress from the Deep South. “It’s important that presidential campaigns recognize women of color as a voting bloc and respond to the issues that are important to us,” says Aimee Allison, founder of She the People, which is hosting the forum on April 24. “We will not be ignored anymore, and the numbers don’t lie. They need us, so they have to both respond and have a campaign that inspires us and reflects our needs.” And what better way to ensure government responds to the needs of an increasingly diverse population than to elect women of color? “It’s our time to lead the nation,” Allison says. “I’m here for that!”

This article originally appeared in the May 2019 issue of Marie Claire.

Related Story
The Women Running for President in 2020
This content is created and maintained by a third party, and imported onto this page to help users provide their email addresses. You may be able to find more information about this and similar content at piano.io
Advertisement - Continue Reading Below
More From Politics
How to Help Black Lives Matter If You Can't Donate
Does Your State Have a Tampon Tax?
Advertisement - Continue Reading Below
What's Ranked-Choice Voting? Allow Us to Explain
Paid Leave for All Isn't Just a 'Women's Issue'
Yes, Caregiving Is Essential Infrastructure
Unforgettable Signs From the Protests
23 Ways Women Still Aren't Equal to Men
Ma’Khia Bryant: What We Know
Greta Thunberg Expertly Trolled Boris Johnson
The Hope and Heartbreak of Derek Chauvin's Verdict