For too many Americans, who we are can determine how safe we'll be: One in three women will be victims of physical violence by a partner; in 2016, police killed more than 250 black people; and a shocking 50 percent of trans people endure some kind of sexual violence.

So it's a bit unnerving that in the midst of so much suffering, some would mock those seeking to fight back or feel safe.

This weekend when Notre Dame students walked out on their commencement speech by Vice President Mike Pence—a man who supports conversion therapy, a practice so abusive it's banned in multiple states—it was dismissed as "PC culture" run amok. (Pundit Tomi Lahren quipped, "Think this kind of crap will fly in the real world? Good luck holding a job, kids!") When online activists demand that Twitter ban users who threaten violence or use racial slurs, they're "snowflakes" who can't tolerate disagreement. And if rape survivors have the nerve to request a moment of emotional reprieve during conversations that might cause them to revisit their trauma…well, they just need to grow up and get out of the "cocoons of their 'safe spaces.'"

Is this really what conservatism is about—making fun of rape victims? Laughing at young people eager to make the world a little bit kinder?

It's this last one—from a recent commencement speech given by New York Times columnist Bret Stephens—that irks me the most. Stephens, who told graduating seniors that "safe spaces, physical and intellectual, are for children," kicked off his talk by telling the story of an event at Brown University where two speakers came to debate rape culture. The school's students organized a room for those who might get upset during the conversation, and Stephens recounted that the "safe space" was filled with coloring books, calming music, pillows, and videos of puppies.

But here's the thing: I was actually one of the speakers at that debate, and I visited the so-called "safe space" beforehand. I don't remember puppy videos and pillows; if there was calming music or coloring books, it wasn't noticeable. But singling out details like this—making it sound like a preschool for hysterical grownups rather than a quiet room with trained counselors—is an intentional move to discredit. 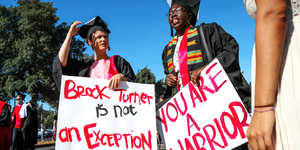 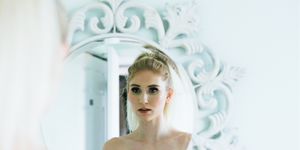 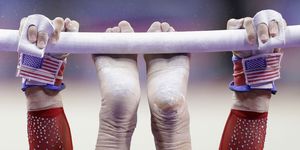 Is this really what conservatism is about—making fun of rape victims? Laughing at young people eager to make the world a little bit kinder?

People who are marginalized know that there's no such thing as a safe space, not really. They're reminded of just how unsafe they are any time they walk down the street and a stranger comments on their breasts or they're prevented from using the correct bathroom at school.

And for people who face that kind of discrimination or danger on a regular basis, there is often no disconnect between ideological and literal safety—or lack thereof. Studies on domestic abusers, for example, show that regressive men are the ones more likely to hit women. Someone who is willing to participate in hate speech online may be more likely to commit violence in real life: This week the murder of black Maryland student is being investigated as a possible hate crime after authorities found that his killer was a member of a racist Facebook group.

To men like Stephens, an issue like rape can be an abstract notion, but women don't have the privilege of sexual violence as a thought exercise. It's easy to mock the idea of safety when it's not something you have to think about on a daily basis.

To men like Stephens, an issue like rape can be an abstract notion, but women don't have the privilege of sexual violence as a thought exercise.

Young people and activists aren't talking and thinking about "safe spaces" because they want to avoid unpleasantness—they know all too well that they can't. Maybe they just believe in people's ability to be compassionate despite that truth. That's something that should be lauded.

Oh, and something to note: Stephens (a white male columnist at a prestigious publication) gave his speech about the needlessness of safe spaces at Hampden-Sydney College, a school where students are all-male, 84 percent white, and have a median family income of over $126,000 a year. Maybe it's not the students who need to get out of their comfort zone.