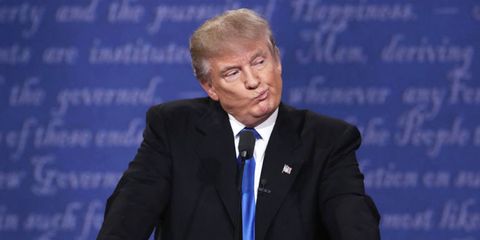 It appears that Donald Trump may have been buying Twitter followers on his @realDonaldTrump account, according to the Metro.

At the time of writing, Trump's Twitter following had increased by five million followers over just a few days. The majority of them are recently created accounts from May 2017 that are lacking photos or tweets, telltale signs of a fake or bot account.

According to Twitter Audit, approximately 15 million of his 30,971,480 followers are in fact fake, which is almost exactly half.

For comparison, in April 2016, FiveThirtyEight reported that Trump had just 7.6 million Twitter followers and only eight percent of those were fake, compared to the 49 percent of questionable followers he now boasts.

So what's the reason for the sudden increase? Is he even aware of his popularity with bot accounts? Or is he simply trying to catch up with Barack Obama's impressive 89 million followers, of which 79 percent are real?

This content is created and maintained by a third party, and imported onto this page to help users provide their email addresses. You may be able to find more information about this and similar content at piano.io
Advertisement - Continue Reading Below
More From Politics
America Has a Dark History of Forced Sterilization
Alicia Garza Says Voting Is a Form of Protest
Advertisement - Continue Reading Below
Twitter Reacts to Amy Coney Barrett Confirmation
What's at Stake for the Environment in November
When Will We Know Who Won the Election?
A Guide to Celebrity Presidential Endorsements
A Debate Coach Grades Final Presidential Debate
Twitter Has Thoughts On the Presidential Debate
Can You Vote Online in the 2020 Election?
What's at Stake for Abortion in the 2020 Election