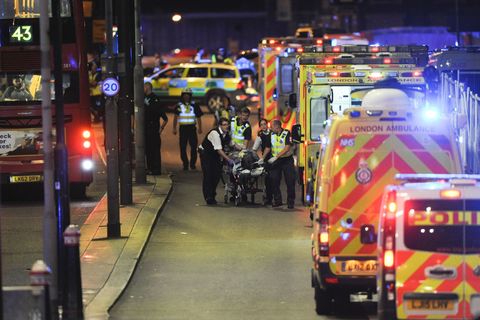 As much of the world prepared to go to bed last night, news of another barbaric attack on innocent people enjoying their lives began to break, this time in the London Bridge area of the capital city. It came less than two weeks after the atrocity in Manchester where 22 Ariana Grande fans were killed by suicide bomber Salman Abedi following her gig, and just one day before the singer's fundraising benefit concert for the victims of the Manchester attack.

The Metropolitan Police have confirmed seven fatalities have so far occurred as a result of last night's incidents in London, which they are treating as an act of terrorism.

Here's everything we currently know.

At approximately 10.08pm on Saturday June 3, ambulances and armed police become some of the first responders to reports of an incident on London Bridge, in which a white van was said to have driven at high speeds into pedestrians.

BBC reporter Holly Jones, who just so happened to be passing by the scene at the time, described how "a white van driver came speeding - probably about 50mph - [and] veered off the road into the crowds of people who were walking along the pavement. He swerved right round me and then hit about five or six people."

Contrary to previous vehicle-related attacks, where the cars and their occupants have come to a stand-still following a collision, a taxi driver named Chris told LBC radio station how "three men... with long blades, 12 inches long" got out of the van and began moving on foot "along Borough High Street stabbing people at random. I saw a young girl stabbed in the chest," he said.

The Telegraph reports two witnesses recalled hearing the attackers shouting, "This is for Allah" as they carried out the brutal acts of violence.

As news of the London Bridge van attack and the Borough Market knife attacks began to unfold, and it became increasingly evident they were linked, the Metropolitan Police's Twitter account announced officers had attended a third incident at Vauxhall, a little over two miles south west of the initial incidents.

This, however, was later deemed to be an entirely separate event.

Following the terror attack which took place at London Bridge and Borough Market - areas which are renowned for their bars and restaurants - it was confirmed that six people had so far died in the attack, none of whom are yet named. This has since been updated to seven following the death of one more victim.

The official London Ambulance Twitter page announced they had admitted 48 people with serious injuries to five London hospitals, and treated many others for minor injuries at the scene. Walking wounded victims caught up in the attack were advised to head to the Andaz Hotel in Liverpool Street where they could seek treatment.

We have taken 48 patients to hospital following the incident at #LondonBridge https://t.co/hCiKVCBrnb pic.twitter.com/5ipl5vtcTB

Assistant Commissioner of the Met police, Mark Rowley, confirmed in a statement that the three attackers had been shot and killed by police within eight minutes of the first call, despite widespread fear among people out in London last night that attackers may still be on the run. Police have confirmed they do not believe this is the case.

The three assailants were found by police to have what looked like explosive belts strapped around them, however these later turned out to be "hoaxes".

"He is currently being treated in a central London hospital and his family are with him while he receives treatment."

Prime Minister Theresa May rushed back to Downing Street following news of the terror attack breaking late last night, and has called an emergency Cobra meeting with cabinet ministers and intelligence chiefs for early Sunday morning. In an official statement from the PM regarding the incidents, she labelled last night's events "terrible" and confirmed they were "being treated as a potential act of terrorism".

"This is a fast moving investigation. I want to express my huge gratitude to the police and emergency services who are on the scene. Our thoughts are with those who are caught up in these dreadful events," the statement added.

British Police later confirmed they had arrested 12 people in east London over the attack, the Associated Press reports. In a statement, they said the arrests were made on Sunday morning in Barking by counterterrorism officers. They added that the investigation is progressing rapidly.

Today we and the rest of the country are thinking of anybody affected by the dreadful scenes in London last night.

Counter-terrorism police are encouraging anyone who took any pictures or video footage of the attack last night to upload it to this website in order to help police with their enquiries. Casualty bureau numbers are 0800 096 1233 and 020 7158 0197.

Catriona Harvey-Jenner Digital Features Editor Cat is Cosmopolitan UK's features editor covering women's issues, health and current affairs.
This content is created and maintained by a third party, and imported onto this page to help users provide their email addresses. You may be able to find more information about this and similar content at piano.io
Advertisement - Continue Reading Below
More From Politics
Moving Forward: We Need Better, Not 'Normal'
Could This Be the Last Year of Roe v. Wade?
Advertisement - Continue Reading Below
Meet the Next Presidential Pets, Major and Champ
Who Is Jen Psaki, Biden's Press Secretary?
Bernie Sanders at the Inauguration Is a Whole Mood
The Inaugural Concert Was a Cheesy Balm
Read VP Kamala Harris's Inauguration Speech
No, There Is No Inaugural Ball This Year
Kamala Harris Is "Momala" to Two Stepchildren
Read Amanda Gorman's Moving Inauguration Poem