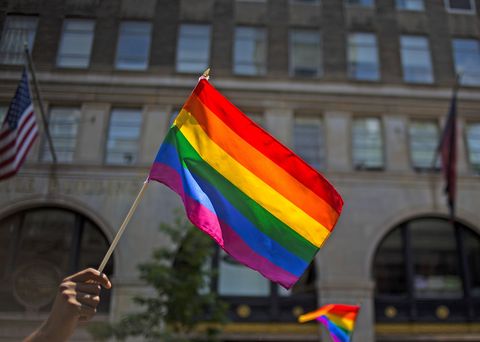 It’s Pride month—a celebration of the legacy of resistance that people who are lesbian, gay, bisexual, transgender, gender non-conforming, and more have waged to live their lives on their own terms. Fifty years ago this month, the now-famous uprising at the Stonewall Inn in New York City marked a turning point for people who were forced to live in the shadows because of their sexuality or for choosing to defy gender norms.

As a Black queer woman who has been married to a trans person for more than 10 years, I’m conflicted about what Pride has become. While rainbow flags decorate nearly everything from my Uber ride to streetlights, more than 10 trans women, the majority of them Black, have been murdered this year—seven have been murdered in the past month.

More than 10 trans women, the majority of them Black, have been murdered this year.

From Sylvia Rivera to Miss Major Griffin Gacy, trans women of color have opened doors for others in the community to live more freely. Yet few seem to want to interrupt the celebrations to take on a fundamental question facing not only the queer community but the whole of American society: Why are Black trans women being murdered?

Gender is a tricky terrain, littered with what we have all been taught about what a “man” is and what a “woman” is. Most of those characteristics are constructed by society and are rooted in power. Being assigned a woman or a man, through no choice of your own, has consequences. In America, being assigned a woman means being paid less and being more likely to be sexually assaulted or raped, among other things.

What is also tricky, and for many, dangerous, about being assigned a gender is that if you defy the gender you were assigned, you are more susceptible to being forced to live below the poverty line, to be unemployed or conditionally employed, to lack adequate healthcare, and to be murdered.

Exclusion, discrimination, poverty, and a lack of political power is what is killing trans women, and, particularly, trans women of color. Daring to define yourself, for yourself, is a fundamental value that this country espouses, and yet this community is not being afforded the promise that America claims to offer.

Isa Noyola is the Deputy Director at Mijente, a hub for organizing Latinx and Chicanx people online and offline. Noyola, who is a trans Latinx activist herself, works with members of her community to change the laws and the culture that keeps trans women on the outskirts of society, and has done so for the last decade. “The community has been in survival mode, and has been insular in trying to survive and keep living, in ways that are often clandestine. The large part of our community is engaged in street-based economies: sex work or other means of survival. We have had to take care of ourselves without relying on the state to protect us, and there’s resilience in that.”

Exclusion, discrimination, poverty, and a lack of political power is what is killing trans women.

The 2015 U.S. Transgender Survey reports that conditions facing Black transgender people are shocking, even in comparison to their Black cisgender counterparts. Twenty percent of respondents were unemployed, twice the rate among Black people in the U.S. population, and 38 percent of respondents were living in poverty, as compared to 24 percent of Black people generally. Thirty-four percent of respondents who saw a healthcare provider that year reported having at least one negative experience related to being transgender, including being refused treatment, being verbally harassed, being physically or sexually assaulted, or having to teach the provider about transgender people in order to receive appropriate care. Two-thirds of Black respondents said they would feel somewhat or very uncomfortable asking the police for help. The National Transgender Discrimination Survey reports that Black and Black multiracial respondents had the highest rate of sex trade participation (40 percent), followed by Latinx respondents (33 percent).

Marsha P. Johnson was 23 when she got involved in the uprising at the Stonewall Inn, at the same time that she was performing sex work in order to survive and managing challenges with her mental health. Aria Sa’id, Janetta Johnson, and Honey Mahogany founded the first transgender cultural district in San Francisco, California, commemorating the Compton Cafeteria Riots a full three years prior to the Stonewall uprising. Raquel Willis is the first Black transgender woman to lead OUT magazine, one of the nation’s premier magazines dedicated to the LGBT community. Janet Mock, director, writer, and producer of the hit television show Pose, just last week made history when she became the first Black trans woman to land a major deal with Netflix. These are just a few accomplishments by Black trans women that defy the circumstances they are forced to confront every day.

Black trans women are working to build power, to change the laws that leave them out, and to shift the culture that dehumanizes them. One of those changemakers is Andrea Jenkins, the first Black trans woman to be elected in the country, who represents Ward 8 on the Minneapolis City Council. “When we lift up the most marginalized people in our community, in our society, in our country, everybody benefits,” she says. Jenkins points to federal legislative solutions like the Equality Act that would add gender identity and sexual orientation to groups deserving of protection from discrimination in housing, employment, and healthcare. The bill passed the U.S. House of Representatives, but is unlikely to be considered in the Senate, due to opposition from Senate Majority leader Mitch McConnell from Kentucky.

More from Alicia Garza
Alicia Garza on Mass Incarceration & 2020
Why So Many Abortion Bans Are in the South
Alicia Garza Alicia Garza is Principal at the Black Futures Lab, co-creator of the Black Lives Matter Global Network, and passionate about Black people being powerful in politics.
This content is created and maintained by a third party, and imported onto this page to help users provide their email addresses. You may be able to find more information about this and similar content at piano.io
Advertisement - Continue Reading Below
More From Politics
How to Demand Justice for Adam Toledo
Daunte Wright's Death Sparks Protest in Minnesota
Advertisement - Continue Reading Below
41 Surprising Rules First Ladies Have to Follow
Asian American Women on Where to Go From Here
Syrian Journalists Reflect on a Decade of War
How to Show Your Support for the AAPI Community
Activist Lydia X. Z. Brown on Disability Justice
Elisa Crespo: "I'm Not Here to Make History"
What We Know About the Georgia Spa Shootings
Dianne Morales Has Never Listened to the Naysayers