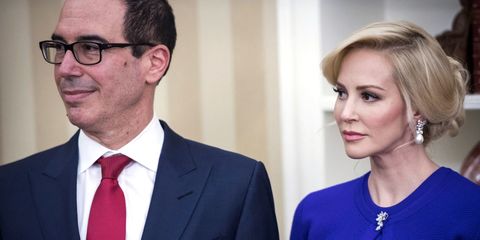 Steven Mnuchin and Louise Linton are in hot water again.

According to the Washington Post, the Treasury secretary requested the use of a military jet for his European honeymoon with new wife Louise Linton. A Treasury Department spokesman told the newspaper that the request was made so Mnuchin would "have access to secure communications" during the trip. 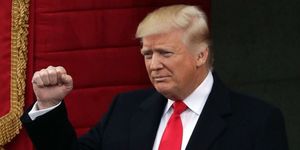 An Air Force spokesperson told ABC News that the jet would cost $25,000 an hour to use. The request was withdrawn "after a secure communications option was identified during the Secretary's extended travel," the Post reports.

"You don't need a giant rulebook of government requirements to just say yourself, 'This is common sense, it's wrong,'" Senator Ron Wyden, the ranking Democrat on the Senate Finance Committee, told ABC News. "That's just slap your forehead stuff."

Last month, Mnuchin and Linton were in the news for a similar jet-related story after they flew on a government aircraft to Kentucky for a trip that involved Treasury Department business, as well as watching the solar eclipse. Linton shared a now-deleted photo of herself exiting the military jet ahead of her husband and captioned it: "Great #daytrip to #Kentucky! #nicest #people #beautiful #countryside #rolandmouret pants #tomford sunnies, #hermesscarf #valentinorockstudheels #valentino #usa

Instagram user @jennimiller89 commented on the post, "Glad we could pay for your little getaway. #deplorable," to which Linton responded, in part: "Aw!! Did you think this was a personal trip?! Adorable! Did you think the US govt paid for our honeymoon or personal travel?! Lololol." (Linton later apologized; ABC reported that "two people familiar with the matter say Linton was not aware that her husband had requested government travel for their honeymoon before making that comment.") 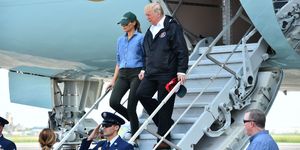 Both the Kentucky trip and Mnuchin's request are being reviewed by the Treasury Department's Office of Inspector General, according to ABC News.