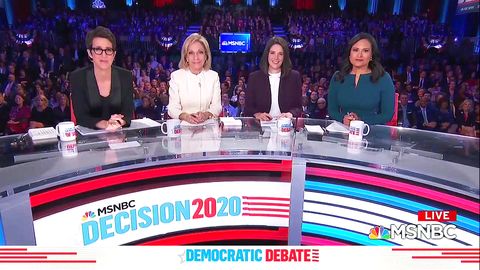 It was exhilarating to see four accomplished, badass female journalists excelling at their jobs—but not surprising. Why? Because they have to be stellar to achieve this level of success. The standards are so high for women that, in many cases, women in any sort of position of power are simply, for lack of a better word, better.

Last night’s Democratic debate was full of thoughtful questions and interesting moments, but there’s one I can’t stop replaying in my mind: Mitchell leveled the following question at Senator Amy Klobuchar:

“You've said this of Mayor Buttigieg, quote, ‘Of the women on the stage, do I think that we would be standing on that stage if we had the experience he had? No, I don't. Maybe we're held to a different standard.’ Senator, what did you mean by that?”

After acknowledging her respect for Mayor Pete, Klobuchar gave a response that made me want to leap up from my couch and applaud:

“What I said was true. Women are held to a higher standard. Otherwise, we could play a game called name your favorite woman president, which we can't do, because it has all been men. And including all vice presidents being men. And I think any working woman out there, any woman that's at home knows exactly what I mean. We have to work harder, and that's a fact.”

Klobuchar’s sentiment was deeply familiar to me. It’s one I echo in my forthcoming thriller, THE HERD, about an exclusive all-female coworking space that’s rocked by the mysterious disappearance of its enigmatic founder. The novel, out in March, goes deep on the complexities of female ambition and the pressures of being a woman in the world.

Men don’t face the same catch-22s as women (be competent but not bossy! Ambitious but not work-obsessed! Agreeable but not weak! Authoritative but not intimidating! Pretty but not superficial!). Especially in professional situations, men can walk in with a presumed gold star and be given a million second chances, while women have to prove themselves from the start.

Don’t believe me? Witness David Benioff and D.B Weiss joking about how they had zero experience plus carte blanche to make Game of Thrones. Rep. Katie Hill was compelled to resign after she admitted to an “inappropriate relationship” with a campaign staffer before coming into office—yet President Trump achieved his office and maintains it while simultaneously being the recipient of dozens of sexual misconduct allegations. With THE HERD, I drill down into the ramifications of living in a society that keeps one gender down—and explore how far women will go in the name of getting ahead.

As last night’s excellent moderators demonstrated, to get ahead, genders and identities other than cis men have to be nearly superhuman. Mayor Pete is confident he can win the presidency, even though he was elected mayor in a Democratic city receiving just under 11,000 votes and lost his only statewide race by 25 points—as Mitchell pointed out. “We need to send somebody in who has a different kind of experience, the experience on the ground, solving problems, working side by side with neighbors on some of the toughest issues that come up in government,” he replied, as if he is the only candidate with experience in local politics. (Senator Cory Booker was the mayor of Newark, NJ, to give just one example.)

As women, we’re fighting an uphill battle, one many men seem to be blind to, as evidenced by Vice President Joe Biden’s response to Klobuchar:

“I think a woman is qualified to be president, and there's no reason why…if you think the woman is the most qualified person now, you should vote for them. The reason why I think I should be president and be the nominee is, number one, I have brought people together my entire career. In the United States Senate, I've passed more major legislation than everybody on this stage combined.”

Did you catch it? Mayor Pete is the most qualified because he has so little national experience. Biden is the most qualified because he has the most national experience—never mind that most women couldn’t begin to compete with his CV, not from a lack of ability but because of systemic sexism and that pesky glass ceiling blocking ladies from the opportunities he, a cis white male, has had since the start of his career. (Oh, and if candidacy were truly about qualifications and not gender…’sup, Hillary?)

Truly, the moderators’ performance was the best endorsement for a female commander-in-chief. She would be spectacular, because she would have to be. People malign identity politics and could misinterpret my message here to be: Any female president would be better than any male president. (I do think just about any woman, period, would be a better president than Donald Trump, but that's neither here nor there.) I’m not arguing that a woman should automatically win. I’m saying that women don’t automatically win matchups against men, uh, ever, so we should give close consideration to the few who’ve made it to this level within the rigged, patriarchal, problematic system.

Representation matters. Seeing ourselves in powerful positions is critical. President Obama inspired a generation of Black children; Wonder Woman redefined superherodom for little girls everywhere. And as last night’s debate proved, a male candidate, no matter how feminist, cannot ever fully understand the female experience—what it's like to live in a world that tries like hell to hold you down.

Behind closed doors, women are already running the world: We quietly manage our households’ mental load and emotional labor, thanklessly working behind the scenes to keep our families, friend groups, and offices running seamlessly. (May I recommend McSweeney’s brilliant take on the subject: ‘How to Stage Your Own Death so Your Husband Understands How Much Work You Do’?) It’s time to acknowledge head-on how freaking impressive successful women are—and let a brilliant, talented, barrier-breaking woman take the country’s reins.

Related Story
Having Multiple Women Debate Changes Everything
Andrea Bartz Andrea is a Brooklyn-based wordsmith and author of WE WERE NEVER HERE, THE HERD, and THE LOST NIGHT.
This content is created and maintained by a third party, and imported onto this page to help users provide their email addresses. You may be able to find more information about this and similar content at piano.io
Advertisement - Continue Reading Below
More From Politics
Report Finds Andrew Cuomo Sexually Harassed Women
Gwen Berry: Athlete, Activist, Olympian
Advertisement - Continue Reading Below
The Anti-Choice Endgame: Power And Control
Give Domestic Workers the Protections They Deserve
Kristin Urquiza Wants Justice for COVID-19 Victims
A Breakdown of VP Harris's Net Worth
WH Announces Removal of the Hyde Amendment
What Liberation Means This Juneteenth
Kathryn Garcia: It's Time to Step Up or Shut Up
A Valedictorian Speaks Out Against Abortion Bans