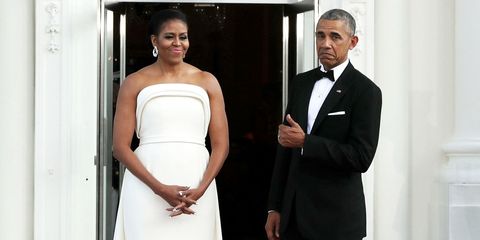 In honor of the Obamas' second and final term coming to an end, we're taking a look at the down-to-earth couple's best photos throughout the years. From stomping the campaign trails to entertaining at the White House, click through to see the cutest candid moments of the First Couple.

Getting ready at their home in Chicago before Senator Obama addresses the Chicago Economic Club, 2004.

Heading to the Neighbors Inaugural Ball in Washington D.C., 2009

Dancing at the Youth Inaugural Ball, 2009

At the Inaugural Parade in Washington D.C., 2009

After speaking at a campaign event at the University of Iowa, 2012

For the kiss cam at the U.S. Men's Olympic basketball team's game against Brazil, 2012

At "Christmas in Washington" with Rita Ora, 2014

Participating in Toys for Tots, 2014

At the first-ever White House Campout, 2015

At the Congressional Black Caucus Dinner, 2015

Handing out treats to children trick-or-treating for Halloween on the South Lawn of the White House, October 2015

Reacting to the first run scored during a baseball game in Havana, Cuba, March 2016

Imitating monsters as they read "Where the Wild Things Are" during the White House Easter Egg Roll, March 2016

Listening to Michelle's remarks during a comedy show organized for members of the military and their families, May 2016

Waiting for leaders to arrive for the Nordic state dinner at the White House, May 2016

At a ceremony on the South Lawn, August 2016

Waiting for the arrival of Singapore Prime Minister and his wife at the White House, August 2016

Before an official state dinner, August 2016

Next
8 First Ladies Who Should Have Been President 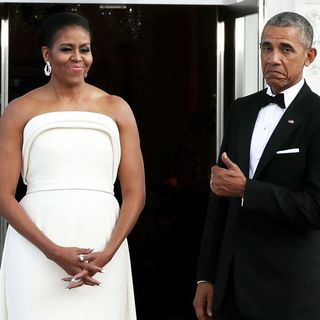