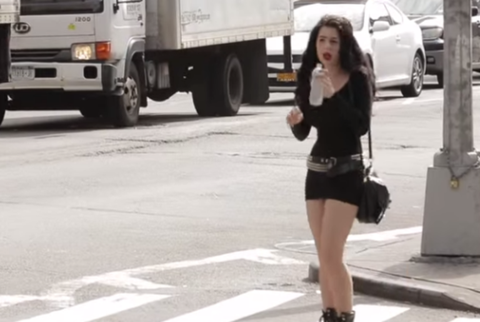 Whether it's being catcalled, followed, or physically assaulted, street harassment is a pervasive problem. A short documentary from Vocativ talks to several women who share their harassment experiences. One interviewee agreed to wear a hidden camera as she walked around her city. Men called out at her, entered her personal space, and even purred at her as she simply walked on the sidewalk.

The documentary also tells the story of Jen Corey, a former Miss America finalist who advocates against street harassment. In an interview, she talks about being physically violated on the Washington, D.C., metro last year. She and others mention how men "smirk" at them after getting away with harassment and abuse.

Despite Vocativ and Corey's best effort to expose the horrors of harassment, some people still aren't getting it. Corey says she's been barraged with tweets trying to prove her wrong since the video was released. It's clear there's still a lot of work to do before women can walk in public undisturbed.

When Geeks Attack: Sexual Harassment in the Tech Community

What Happens When We Turn the Tables on Guys