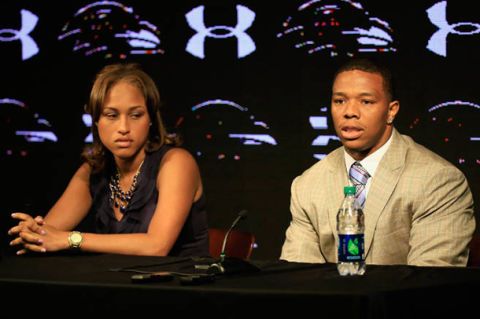 Janay Rice's revealing Instagram comes after many people on social media, as well as several media outlets, asked the question "Why did she marry him?" After seeing the video, many wondered how a woman could possibly stay with a man who would attack her so violently. Which, as writer Beverly Gooden points out, is victim blaming. "When I saw those tweets, my first reaction was shame. The same shame that I felt back when I was in a violent marriage," Gooden told Mic in an interview. "It's a sort of guilt that would make me crawl into a shell and remain silent. But today, for a reason I can't explain, I'd had enough. I knew I had an answer to everyone's question of why victims of violence stay. I can't speak for Janay Rice, I can only speak for me."

So Gooden created the hashtag #WhyIStayed in an effort to shed some light on the psychology of domestic abuse. She shared some of her own stories and asked others to join the conversation. The result: thousands of powerful tweets that show why it's so difficult for a victim to leave his or her abuser.

All these folks trashing women for staying in abusive situations have NO clue what happens the moment you reach for a door handle.

I tried to leave the house once after an abusive episode, and he blocked me. He slept in front of the door that entire night. #WhyIStayed

I stayed because my pastor told me that God hates divorce. It didn't cross my mind that God might hate abuse, too. #WhyIStayed

He said he would change. He promised it was the last time. I believed him. He lied. #WhyIStayed

I stayed because I was halfway across the country, isolated from my friends and family. And there was no one to help me. #WhyIStayed

I stayed because I thought love was enough to conquer all. #WhyIStayed

I had to plan my escape for months before I even had a place to go and money for the bus to get there. #WhyIStayed

I hope the women tweeting in #WhyIStayed feel powerful and heard. So thankful that you are here to tweet your voice.

#WhyIStayed Because I believed him when he said I deserved it. My mother said the same thing when I was little.

Sally Holmes Digital Director Sally is the Digital Director of MarieClaire.com where she oversees coverage of all the things the Marie Claire reader wants to know about, including politics, beauty, fashion, celebs, and Prince Harry's facial hair.
Advertisement - Continue Reading Below
More From Politics
Marie Claire Wants You to Vote
The Ecowarriors Greenifying Big Tech
Advertisement - Continue Reading Below
Who Is Andrew Cuomo's Ex-Wife Kerry Kennedy?
How Planned Parenthood Is Responding to COVID-19
British PM Boris Johnson Has Coronavirus
Fear Is a Virus
COVID-19 Exposes the Dangers of Gender Inequality
“I’m Homeless—How Can I Self-Quarantine?”
Will the Conventions Be Canceled in 2020?
Rep. Katie Porter on Being an Effective Politician