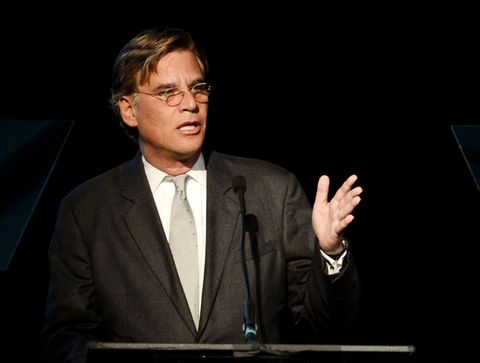 Aaron Sorkin, who has already incited his fair share of public ire for favoring male characters on his show The Newsroom, has claimed that women's roles in Hollywood have a lower "degree of difficulty" than men's. In a leaked email published by The Daily Beast, Sorkin argues that Meryl Streep and Helen Mirren are two of the only female stars "who can play with the boys."

The leak follows the revelation that Jennifer Lawrence and Amy Adams were paid less than their American Hustle co-stars, despite the fact that they actually had more screen time.

"There's an implication that studio heads have a stack of Bridesmaids-quality scripts on their desk that they're not making and it's just not true. The scripts aren't there.

That's why year in and year out, the guy who wins the Oscar for Best Actor has a much higher bar to clear than the woman who wins Best Actress. Cate [Blanchett] gave a terrific performance in Blue Jasmine but nothing close to the degree of difficulty for any of the five Best Actor nominees.

Daniel Day-Lewis had to give the performance he gave in Lincoln to win—Jennifer Lawrence won for Silver Linings Playbook, in which she did what a professional actress is supposed to be able to do.

Phil Hoffman had to transform himself into Truman Capote while Julia Roberts won for being brassy in Erin Brockovich.

Sandra Bullock won for The Blind Side and Al Pacino lost for both Godfather movies. Helen Mirren and Meryl Streep can play with the boys but there just aren't that many tour-de-force roles out there for women."

Hm. As a Hollywood writer and famed showrunner, you'd think Sorkin could, you know, change that?