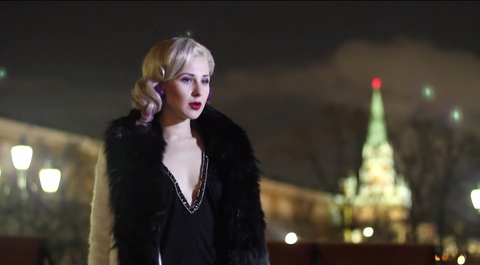 In the edgy video, the two women wear gothic art deco outfits and use broomsticks to sweep the snow of the Manezh, a central square in Moscow near the Kremlin that is often used for protesting. They chant "Clean, honest, word, deed" before riding off into the nigh like witches.

The video is a call for a mass protest on Manezh Square at 7 p.m. on Tuesday, in response to the trial of prominent Putin opposition activist Alexey Navalny. Navalny was accused of fraud and money laundering, which many believe is just a front for Putin's well-known desire to put the critic behind bars.

To everyone's surprise, Navalny was granted a suspended sentence, while his brother, Oleg Navalny, was given a three-and-a-half year prison term for the same crime.

Protests in Manezh Square have been increasing Tuesday night as citizens take to the streets to rally against the verdict. And in a case of things coming full-circle, Alexey Navalny was ultimately arrested after he tweeted that he would attend the protests and was later pictured there.