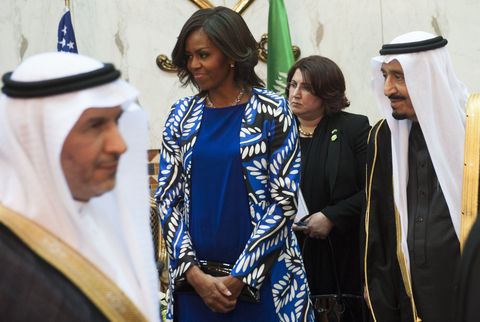 President and First Lady Obama traveled to Riyadh yesterday to pay respects to the recently deceased Saudi Arabian king. It was an impromptu visit, and the Obamas had to cut their big trip to India short. But it was the First Lady's wardrobe choice, not the diplomatic gesture, that made headlines this week.

When FLOTUS greeted a group of male Saudi officials sans traditional headscarf, some of them shook her hand and others simply nodded in her direction, but on social media, the reaction was much more harsh.

According to the Washington Post, a Twitter hashtag that roughly translates to "Michelle Obama unveiled" started to trend. Why, users wondered, did she wear a headscarf in Indonesia but not in Saudi Arabia? And to pay respects to the king, no less?

Women's dress is severely restricted in Saudi Arabia, under the country's interpretation of Islamic Shariah law. Average Saudi citizens are expected to wear a headscarf and black robes when they go out in public, the Associated Press reports. But there are exceptions made for foreigners, and some Western tourists in particular choose to skip the headscarf altogether.

But on a refreshing note, the controversy blew over in what seems like record time. According to the BBC, the backlash was surprisingly small given Twitter's popularity in Saudi Arabia. And many tweets ended up making fun of the situation as opposed to the First Lady, and mocked the Saudi government's harsh restrictions on women.

This may be because Twitter is a young person's medium, but still–if young people don't care about the headscarf kerfuffle, it might be a sign that they want fewer restrictions on women in general. Who knew a wardrobe mishap would actually give us some hope about the world?

Last Night's State of the Union Was Not, in Fact, a Major Victory for Women