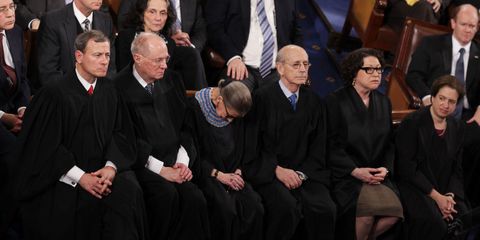 The concept of "sober as a judge" might need a refresh. Supreme Court Justice Ruth Bader Ginsburg admitted that she got a little tipsy before this year's State of the Union address.

The 81-year-old nodded off during the president's speech, and the image quickly went viral. She kept falling asleep the entire time, even with her coworkers nudging her awake every once in a while.

Ginsburg laughed it off during an event with fellow justice Antonin Scalia, saying that she "wasn't 100 percent sober" because the justices had a boozy dinner before the event, like they do every year. "I vowed this year—just sparkling water, stay away from the wine—but in the end the dinner was so delicious it needed wine to accompany it," she said. Plus, the rest of the audience gets to stay awake by standing to applaud every few seconds, but the stoic justices don't get that excuse.

Ginsburg and her fellow justices have a full slate of controversial cases to tackle this year, including gay marriage, the Affordable Care Act, and the rights of pregnant women at work. But before that, she took the time to opine on the state of American laws in a wide-ranging interview with Bloomberg. She said Americans would accept a ruling that legalized same-sex marriage and said "women should be concerned" that abortion restrictions target poor women who can't afford to cross state lines for the procedure.

Earning her Notorious RBG nickname, she added that part of her job is to stand up for women's rights and perspectives on the court. And though she thinks a female president would help get more women in power, she's hesitant to say it would make things better for women everywhere. "That doesn't necessarily mean that the rest of society will progress along the same lines," she said. "The progress is slow, but it's definitely headed in the right direction."

Wait 'Til You See This Amazing Ruth Bader Ginsburg Tattoo