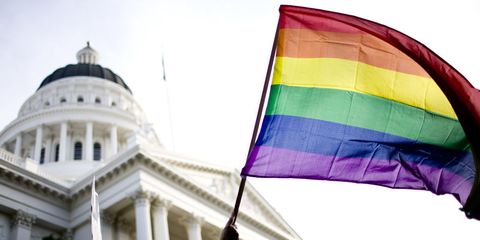 You know American politics is in a bad place when "The Intolerant Jackass Act" isn't such a crazy idea. In California, the idea it's responding to is even crazier—and actually scary.

Last month, local lawyer Matt McLaughlin proposed the "Sodomite Suppression Act," a ballot initiative that would execute anyone "who willingly touches another person of the same gender for purposes of sexual gratification." It would also outlaw distributing gay "propaganda" and prohibit gay people from holding public office. Yes, really, this was proposed in 2015, in the United States.

The state will likely be forced to allow the measure to get signatures because McLaughlin paid his $200 filing fee and complied with every regulation, according to the San Francisco Chronicle. If it gets 365,000 signatures, it will be on the ballot next year. But it's highly unlikely that will happen, and even if it passes, it's unconstitutional and would never make it past the courts.

Though it may be difficult to block the proposal, one activist is hoping to prevent future ones, with an awesomely named proposal of her own. According to Slate, Charlotte Laws is filing the "Intolerant Jackass Act," which would mandate sensitivity training and a $5,000 donation to pro-LGBT groups for anyone who proposes a ballot measure to kill gay people.

Laws says she came up with the act to show that not all Californians feel like McLaughlin does. "We have a very open-minded state and country," Laws told Slate. "This is one guy, and there are millions of us who do not agree with this."

There's one problem, though: This act is also unconstitutional. Freedom of speech generally lets people speak their minds want without legal consequences, but it also lets people be, well, intolerant jackasses. There's also another tactic going around that might have more of an impact; a Change.org petition to have McLaughlin disbarred has gained more than 20,000 signatures.