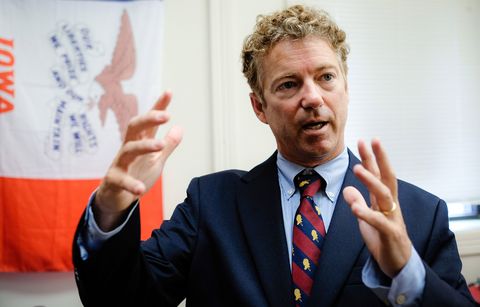 Rand Paul is a licensed eye doctor running for president, but he might have another dream gig in the back of his mind: journalist. While appearing on the Today show, the Kentucky senator scolded anchor Savannah Guthrie live on air for "editorializing" a question (i.e. explaining his previous statements prior to the interview before posing a new question to him) instead of just asking outright.

"You have had views in the past on foreign policy that are somewhat unorthodox, but you seem to have changed over the years," she says as Paul starts to interrupt. "You once said Iran was not a threat, now you say it is; you once proposed ending foreign aid to Israel, you now support it–at least, for the time being; and you once offered to drastically wanted to cut defense spending and now you want to increase it 16%. So I just wonder if you've mellowed out?"

"Yeah, why don't we let me explain instead of talking over me, okay?" he said, before explaining to the interviewer how he thought she should do her job. "Before we go through a litany of things you say I've changed on, why don't you ask me a question: 'Have I changed my opinion?'"

Paul and Guthrie continue to volley—and it makes for a rather tense interview.

But this isn't the first time Paul has had a problem with how the media has interviewed him. In February, the Presidential hopeful told CNBC anchor Kelly Evans to "calm down" and actually shushed her during the interview.

Afterwards, Fox News anchor Megyn Kelly had him on her show to explain himself. Watch here:

Hillary Clinton Will (Finally) Announce Her Presidential Campaign on Sunday

Samantha Leal Senior Web Editor I'm Sam, the senior editor at MarieClaire.com.
This content is created and maintained by a third party, and imported onto this page to help users provide their email addresses. You may be able to find more information about this and similar content at piano.io
Advertisement - Continue Reading Below
More From Politics
Want to Help Moms? Prioritize Menstrual Equity
Abortion Rights Start at the State Level
Advertisement - Continue Reading Below
All of Your Abortion Questions Answered
The Texas Abortion Snitch Site Is Having a Bad Day
The Future of Afghan Women Depends on Us
How You Can Help People in Afghanistan
Andrew Cuomo Has Resigned as NY Governor
Gwen Berry: Athlete, Activist, Olympian
The Anti-Choice Endgame: Power And Control
Give Domestic Workers the Protections They Deserve