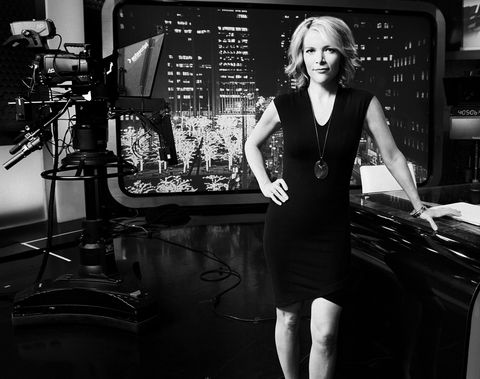 Megyn Kelly is a woman who publicly states her opinion, and openly challenges men in power. So, because this is life in 2015, it's not exactly the biggest shocker that men on the Internet are being horrible to her—and possibly threatening her safety, too.

During last week's presidential debate, the Fox News anchor challenged Donald Trump's previous insulting comments about women, and Trump has publicly called her out throughout this past week. He retweeted supporters who called her "unprofessional" and a "bimbo," and went even further on television.

Trump even said she had "blood coming out of her eyes, blood coming out of her wherever" during the debate, insinuating that she asked tough questions because she was menstruating. And he has neither backed down nor apologized, even after facing outrage from the Republican establishment. He went so far as to point to a Howard Stern interview in which Kelly openly talked about sex with her husband to prove she isn't "innocent" or "pure."

But it isn't Trump who is causing the biggest problems for Kelly. It's his supporters. Just search for her name on Twitter and you'll find outpourings of misogyny, with people tweeting photos of her in sexy outfits (many of which are Photoshopped) to somehow prove she's not serious about her job. And some people are taking it even further. A source familiar with the matter says there have been physical security concerns around Kelly ever since the debates.

On Monday, Fox News chairman Roger Ailes stuck up for Kelly in a statement:

"Donald Trump and I spoke today. We discussed our concerns, and I again expressed my confidence in Megyn Kelly. She is a brilliant journalist and I support her 100 percent. I assured him that we will continue to cover this campaign with fairness & balance. We had a blunt but cordial conversation and the air has been cleared."

On Monday night's The Kelly File, Kelly kept her response short and sweet. "Trump who is the front-runner will not apologize and I certainly will not apologize for doing good journalism," she said. "So, I'll continue doing my job without fear or favor." And that fearless attitude has paid off: Fox News had the best ratings week since 2003.