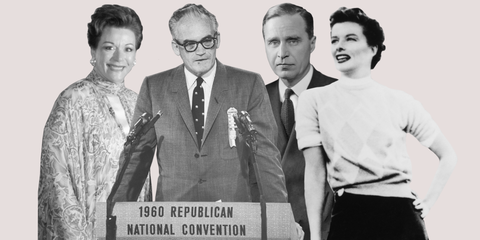 Republicans really, really don't like Planned Parenthood. If thepresidential candidates haven't made that clear, conservatives in Congress did last week when they threatened to shut down the government—yet again—over Planned Parenthood's federal funding.

But the reason Planned Parenthood exists and even receives federal dollars in the first place is largely because Republicans got it off the ground.

When birth control was legalized, Republicans helped expand access to contraception for low-income people because they recognized its economic value to women, families, and taxpayers. Even when abortion was legalized through Roe v. Wade, a women's right to choose wasn't immediately a partisan issue—or much of an issue at all.

Over the past few decades, the Republican Party has shifted further right—and the politics behind this evolution explain why the GOP is trying to stop the very thing that they started 45 years ago.

From Nixon using abortion legislation to strategically woo Catholics to lobbyists deliberately linking family planning to abortion in the '90s, the Republican long game to court a new voter base was nothing if not effective. Today, it's almost impossible to be a pro-choice Republican running for any major political office. And across the country, state-level efforts to restrict abortion access are powering forward: in Texas, the number of abortion providers dropped from 40 to eight in a little over a year.

Though reproductive rights seem to be disappearing before our eyes, the secret Republican history of Planned Parenthood tells a different story—namely that it doesn't have to be this way, because it hasn't always been.

The organization was an affiliate of the American Birth Control League, which would eventually become Planned Parenthood.

The same year, former Republican President Eisenhower (who said just six years earlier that it's not the government's "business" to support birth control) serves as co-chairman of a Planned Parenthood committee with Harry Truman. In a 1968 address to Congress, then-Congressman George H.W. Bush advocates for government support of family planning programs, citing statistics from a Planned Parenthood clinic.

The federal grant program, which provides planning services to low-income families, was championed by President Nixon and George H.W. Bush (who was such a vocal supporter of birth control that he was supposedly nicknamed "Rubbers"). The funds have never been used to provide abortions because of provisions written into the law.

Only a year after the Supreme Court struck down Massachusetts' prohibition of birth control for unmarried women through Eisenstadt v. Baird.

As they adopt an anti-choice stance, the Democrats adopt their first pro-choice platform.

A Human Life Amendment, which would have overturned the Supreme Court's decision, comes to vote for the first and only time after several attempts. The Senate defeats it, with Goldwater reversing his previous position to vote against it (Planned Parenthood still issues an achievement award named for him.)

Their strategy centers on the idea that government funding for family planning providers "frees up" money that is used for abortions. In 1992, polls show that as many as 71% of Republican Party members are pro-choice. But by 1996, public opinion changes sharply as the number of people believing that abortion should be legal "under certain circumstances" overtakes the number of people who believed abortion should always be legal.

Only six Republicans vote against it.

She's grilled by GOP members who would rather the government shut down than Planned Parenthood continue to receive federal funding—even though that funding has never been used to provide abortions.

Scarlet Neath Politics Writer Scarlet Neath is a freelance writer covering politics.
This content is created and maintained by a third party, and imported onto this page to help users provide their email addresses. You may be able to find more information about this and similar content at piano.io
Advertisement - Continue Reading Below
More From Politics
Kristin Urquiza Wants Justice for COVID-19 Victims
A Breakdown of VP Harris's Net Worth
Advertisement - Continue Reading Below
WH Announces Removal of the Hyde Amendment
What Liberation Means This Juneteenth
Kathryn Garcia: It's Time to Step Up or Shut Up
A Valedictorian Speaks Out Against Abortion Bans
Standing Between Care and Violence
Seeking Healing a Century After the Tulsa Massacre
What to Know about Texas's Abortion "Trigger Ban"
A New Book Invites Us to Rethink Menstrual Equity