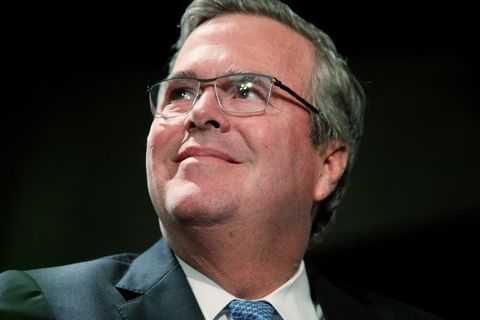 In a moment that will doubtless go down in the annals of political history, Jeb Bush revealed his crush on Supergirl during a campaign stop in Nevada. Unsurprisingly, it was super weird (not sorry for that pun).

When asked to name his favorite comic book hero, the Republican presidential hopeful said, "I saw [an] when I was working out this morning. She looked kinda...she looked pretty hot."

The Supergirl in question is 27-year-old Melissa Benoist, who stars on CBS's upcoming series of the same name. Benoist's Supergirl will *hopefully* join the ranks of Agent Carter as a refreshingly feminist approach to the superhero canon, which makes Bush's arguably sexist comments feel a little tone-deaf.

In related news, Dubya's brother also informed everyone that he wishes he owned Marvel, because he enjoys "the old-school guys like Batman."

It's like, Jeb. Everyone knows Ben Affleck and the Ghost of His Beard belong to DC. Get your facts straight.