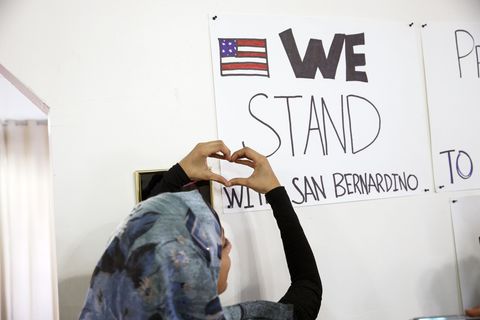 The community in San Bernardino, California is still reeling, along with the rest of the country, after a mass shooting killed 14 people and injured 17 on December 2. And now, well-wishers from around the world have broken fundraising records to support the victims' families in this time of grief.

The Los Angeles Times reports that a charitable campaign has become the biggest crowdfunding venture Muslim Americans have ever created for the general population. A collective of American Muslim leaders and groups came together to raise money for the families of the victims, creating "Muslims United for San Bernardino" on the crowdfunding site LaunchGood. "We wish to respond to evil with good, as our faith instructs us, and send a powerful message of compassion through action," the organizers said in a statement. "This united American Muslim campaign aims to reclaim our faith from extremists by responding to evil with good, by rebuilding what they destroy."

Dr. Faisal Qazi, a neurologist from the area, started raising money even before it was revealed that the shooters were Muslims. The support was so strong that he broadened the campaign, which now receives $1,000 in donations every hour. The crowdfunding site itself was founded by a Muslim man who saw a need to give back after the September 11 attacks.

Originally they aimed to raise $20,000, but they reached that goal and then some, now racking up over $175,000. Since they keep exceeding their fundraising goals, the fund hopes to also help the families in the long-term, and potentially donate to the Inland Regional Center, the facility for the developmentally disabled where the shooting happened. They're not the only people who have been raising money for the victims; a GoFundMe campaign started by the mayor of San Bernardino has raised more than $52,000.

"I think [the campaign] sends a clear message that American Muslims are here to build and not destroy," cofounder Tarek El-Messidi told The Huffington Post. "We do not want to be associated at all with extremists who are putting people in harm's way, and we want to show this as just one example of how American Muslims are contributors to society, trying to make our society a better place."