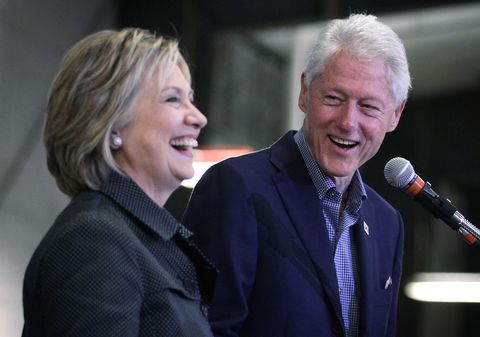 Like the rest of us, President Bill Clinton is super enthusiastic about Hillary Clinton running for president, and he's carved some time out of his busy schedule of Donald Trump side-eyeing to take over her Instagram account. Because yes, unlike Jay Z, Bill Clinton understands how to use social media.

The former POTUS hopped on Hillary's Insta in New Hampshire, and started his adventure effortlessly matching his hair to the snow.

He then posted a sweet photo of Hillary giving him advice before introducing her. Because like Beyoncé, she's not bossy, she's the boss.

Clinton wrapped things up on an even more adorable note, sharing an image of himself and Hillary hugging, captioned "Hillary's worked hard every day to make the lives of millions of Americans better. I am so proud of her."

In conclusion, Hillary and Bill are goals and we are all Chelsea Clinton in the above photo.

Mehera Bonner Contributor Mehera Bonner is a news writer who focuses on celebrities and royals—follow her on Instagram.
Advertisement - Continue Reading Below
More From Politics
Behind the Controversy at the Women's March
Women Are Not Granted Equality in the Constitution
Advertisement - Continue Reading Below
Electability Is About Us—Not the Candidate
Everybody Running for President In 2020
Time’s Up for Wall Street
Women of Color Ruled Last Night's Debate
Cory Booker, Rosario Dawson Are Traveling Together
Is Megyn Kelly a Feminist or What?
Door Knocking With Field Organizers in Iowa
“I Was Illegally Billed Seven Times for My Rape”