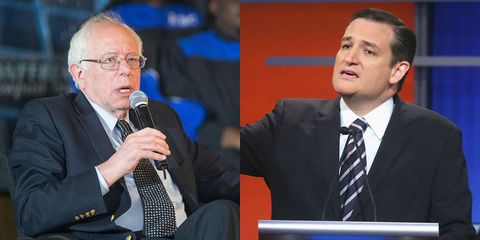 Despite making lots of strides lately, women in still have a nearly impossible challenge to find an actually equal workplace. And that includes the high-pressure world of presidential campaigns. Jezebel reports that out of six presidential campaigns (including Marco Rubio, who dropped out after the investigation was published), four of them had a significant gender wage gap, and women often bear the brunt of that disparity.

On average, Ted Cruz's male staffers made $20,000 more than female staffers. The numbers were less extreme, but still awful, for the campaigns of Donald Trump and John Kasich. (Though Kasich's campaign noted that his is the only campaign run by a woman, which is at least something.)

Two campaigns provided a little hope, though; Hillary Clinton's campaign had roughly the same salaries for men and women, and Marco Rubio's now-defunct campaign actually paid women more than men, on average. Though Bernie Sanders' campaign also paid women slightly more than men, all top 10 earners on his campaign are guys. That's surprising coming from Sanders' campaign, since his platforms are generally aligned with the feminist movement, and even specifically target the pay gap.

It's disappointing that campaigns promising a brighter future for America often seem backwards when it comes to encouraging female politicos. But here's hoping paying closer attention will force prospective candidates to fight for equality in their own campaigns.

This content is created and maintained by a third party, and imported onto this page to help users provide their email addresses. You may be able to find more information about this and similar content at piano.io
Advertisement - Continue Reading Below
More From Politics
Report Finds Andrew Cuomo Sexually Harassed Women
Gwen Berry: Athlete, Activist, Olympian
Advertisement - Continue Reading Below
The Anti-Choice Endgame: Power And Control
Give Domestic Workers the Protections They Deserve
Kristin Urquiza Wants Justice for COVID-19 Victims
A Breakdown of VP Harris's Net Worth
WH Announces Removal of the Hyde Amendment
What Liberation Means This Juneteenth
Kathryn Garcia: It's Time to Step Up or Shut Up
A Valedictorian Speaks Out Against Abortion Bans