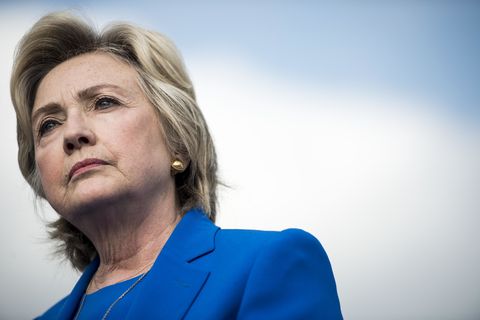 Hillary Clinton is often unfairly criticized for being "cold," "unsmiling," and lots of other adjectives that her male peers simply don't have to deal with. And while it's the belief of *yours truly* that Hillary does not come off as cold (have you heard her talk about her granddaughter?!), she recently took accountability for her poker face. And you guessed it—said poker face is the result of years of being questioned, marginalized, and put-down.

In an interview with Humans of New York (read the full Facebook post below), the democratic presidential candidate explains that the treatment she endured in law school inevitably made her guarded. If she's cold, it's because she had to be.

"I know that I can be perceived as aloof or cold or unemotional. But I had to learn as a young woman to control my emotions. And that's a hard path to walk. Because you need to protect yourself, you need to keep steady, but at the same time you don't want to seem 'walled off.' And sometimes I think I come across more in the 'walled off' arena. And if I create that perception, then I take responsibility. I don't view myself as cold or unemotional. And neither do my friends. And neither does my family. But if that sometimes is the perception I create, then I can't blame people for thinking that."

Any other women find this relatable? Hillary Clinton has spent her life making her mark in a male-dominated field, and that deserves applause—not derision—no matter what face she's making. Oh, and P.S., most of the time she looks like this:

Mehera Bonner Contributor Mehera Bonner is a news writer who focuses on celebrities and royals—follow her on Instagram.
Advertisement - Continue Reading Below
More From Politics
Behind the Controversy at the Women's March
Women Are Not Granted Equality in the Constitution
Advertisement - Continue Reading Below
Electability Is About Us—Not the Candidate
Everybody Running for President In 2020
Time’s Up for Wall Street
Women of Color Ruled Last Night's Debate
Cory Booker, Rosario Dawson Are Traveling Together
Is Megyn Kelly a Feminist or What?
Door Knocking With Field Organizers in Iowa
“I Was Illegally Billed Seven Times for My Rape”