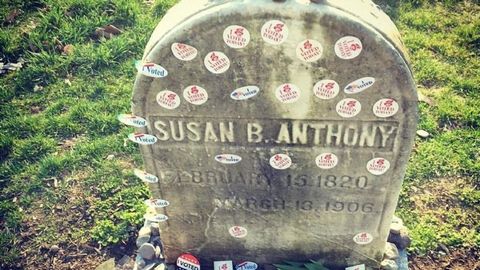 We're one day away from *potentially* nominating the United States of America's first female president, a prospect that's immensely inspiring no matter where you fall on the political spectrum. And of course, it's impossible to think of a potential Hillary Clinton presidency without thinking about how far women have come: sure, we gained the right to vote in 1920—but decades before that, Susan B. Anthony was arrested for casting a ballot in the presidential election.

Because she was the most fearless/badass woman ever, voters typically pay homage to Anthony by leaving "I voted" stickers on her gravestone in Rochester, New York, and it's become such a thing this year that Mt. Hope Cemetery has extended their hours on election day.

Susan B. Anthony was never able to vote, so women are leaving "I voted" stickers on her grave in Rochester. pic.twitter.com/ilBUwvJqns

"Visiting Susan B. Anthony's gravesite has become an Election Day rite of passage for many citizens," Rochester's mayor said in a press release. "With this year's historically significant election, it seems right to extend that opportunity until the polls close."

Mehera Bonner Contributor Mehera Bonner is a news writer who focuses on celebrities and royals—follow her on Instagram.
This content is created and maintained by a third party, and imported onto this page to help users provide their email addresses. You may be able to find more information about this and similar content at piano.io
Advertisement - Continue Reading Below
More From Politics
What Is Mutual Aid? For One, Not a Trend
How to Help Texans During the Winter Storm Crisis
Advertisement - Continue Reading Below
Hate Crimes Against Asian Americans Are Rising
Anti-Trans Bills Are in the Works Across the U.S.
Vanishing Act
The Women Who Took on ISIS—and Won
Yes, Trans People Belong in Sports
I’m a Parkland Survivor. Rep Greene Must Resign
Why Indian Farmers Have Been Protesting for Months
AOC Opens Up About Her Trauma