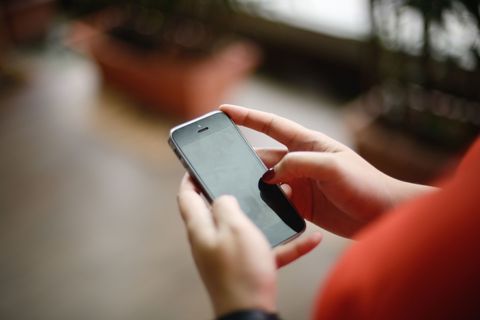 Americans who are unsettled by Trump's election are making their voices known and, thankfully, getting the support they need from crisis hotlines.

Crisis Text Line, a crisis hotline service that pairs someone in need with a trained volunteer crisis counselor via text message, reported receiving two times more texts than usual after the election results were announced early Wednesday. The top two words being used by texters asking for help were "election" and "scared." The most common word associated with "scared" was "LGBTQ."

In the same vein, the National Suicide Prevention Lifeline received an astonishing 660 calls between 1 a.m. and 2 a.m. early Wednesday morning, which was two and a half times the average number of calls, The Washington Post reports.

"We didn't see numbers like this in 2008 or 2012," John Draper, the director of Lifeline, told The Washington Post. "This was an extraordinary year by any stretch of the imagination."

The Trevor Project, an crisis and suicide prevention organization for LGBTQ youth, said their call volume was more than double the typical amount for a Tuesday or Wednesday, although they have not released specific numbers, according to Time.

"Callers are expressing a lot of fear and anxiety around the election results," Steve Mendelsohn, a spokesperson for The Trevor Project, told Time. "We have made so much progress over the past few years, and there's a fear that we're going to backwards and LGBTQ people are going to lose their rights."

Despite the increase in volume, Crisis Text Line was able to help users right away according to their statistics: 91 percent of texters were helped in under five minutes. Those texters who qualified as "high severity," were connected with a someone in just 39 seconds. And an overwhelming majority of those in need, 88 percent of texters, said that connecting with the Crisis Text Line was helpful.

Many celebrities, such as Lady Gaga, have also encouraged people to connect with the various crisis resources available.

So the lesson here: if you or someone you know is in need, don't be afraid to reach out for help. These services are available 24 hours, 7 days a week.

Maggie Maloney Associate Digital Editor Maggie Maloney is the associate editor at Town & Country and ELLE Decor, where she covers style, beauty, jewelry, and the many members of the royal family.
This content is created and maintained by a third party, and imported onto this page to help users provide their email addresses. You may be able to find more information about this and similar content at piano.io
Advertisement - Continue Reading Below
More From Politics
Kristin Urquiza Wants Justice for COVID-19 Victims
A Breakdown of VP Harris's Net Worth
Advertisement - Continue Reading Below
WH Announces Removal of the Hyde Amendment
What Liberation Means This Juneteenth
Kathryn Garcia: It's Time to Step Up or Shut Up
A Valedictorian Speaks Out Against Abortion Bans
Standing Between Care and Violence
Seeking Healing a Century After the Tulsa Massacre
What to Know about Texas's Abortion "Trigger Ban"
A New Book Invites Us to Rethink Menstrual Equity