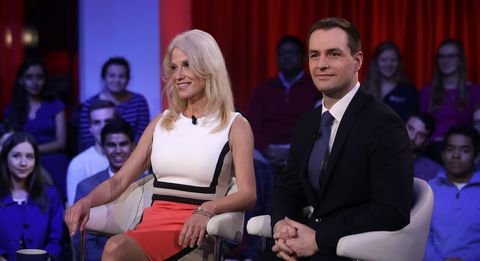 Tempers flared and political fault-lines were inflamed, as aides to Donald Trump and Hillary Clinton gathered for their first meeting since Election Day.

Every four years since 1972, top presidential campaign aides have met for a polite discussion of the fierce battle they just waged. Not so this year.

"Let's be honest, don't act as if you have some popular mandate for your message," said Hillary Clinton's chief strategist, Joel Benenson, citing Clinton's more than 2 million-vote lead in the popular vote. "Hey guys, we won," Kellyanne Conway, Donald Trump's former campaign manager, shot back. She later added: "Hashtag: he's your president. How about that?"

Here were some of the exchanges:

Trump's aides defended his controversial statements, including his recent comments about criminalizing flag-burning, a Muslim travel ban and his racial comments about a federal judge overseeing class-action lawsuits against Trump University.

"I think the American people agree with him that burning the flag is wrong," said former Trump campaign manager Corey Lewandowski, who was fired in June. "I don't care what the Supreme Court has said."

Besides, they argued, there was little they could do to change the mind of a political novice who'd just bested a primary slate of well-known Republican politicians.

Clinton's team said they didn't regret their responses to Trump's racist and sexist remarks, saying they were some of their proudest moments in the race. ""If providing a platform for white supremacists makes me a brilliant tactician, I am proud to have lost. I would rather lose than win the way you guys did," said Palmieri, her voice shaking.

"Do you think I ran a campaign where white supremacists had a platform?" Conway asked. "You did, Kellyanne. You did," Palmieri said, acccording to The Washington Post.

"Do you think you could have just had a decent message for white, working-class voters?" Conway asked. "How about, it's Hillary Clinton, she doesn't connect with people? How about, they have nothing in common with her? How about, she doesn't have an economic message?"

Top Trump staffers cited the billionaire businessman's "innate understanding" of the media as a major reason for his victory, crediting his unique ability to drive the news cycle and social media.

The coverage struck a nerve with his rivals, who argued that the media gave Trump benefits they didn't get. Aides to Texas Sen. Ted Cruz's campaign admitted they feared the "full Trump" — their term for when the New York mogul was shown simultaneously on all three cable news networks.

At a panel on the media's role in the election, top GOP campaign managers heckled CNN's Jeff Zucker after the network president claimed that other candidates turned down interview requests.

"I don't remember being asked to call in," shouted former Carly Fiorina campaign manager Sarah Isgur Flores, arguing that the cable news shows would demand other candidates show up at a studio while letting Trump phone in.

Zucker stood his ground: "I understand that emotions continue to run high. That is not cable news' fault and that is not CNN's fault."

Trump's campaign argued that Clinton should have simply released all her emails to the public, nullifying some of their attacks. Instead, Trump's deputy campaign manager David Bossie said her team "used the old Clinton playbook" by fighting off lawsuits asking to make her correspondence public.

"Is that the playbook you used on taxes?" asked campaign manager Robby Mook, citing Trump's decision not to release his tax returns. Bossie shot back: "It was a winning playbook, I guess."

Trump's staff argued that Clinton simply didn't work for it, citing their more active travel schedule coming out of the national conventions, and failed to motivate women voters despite her historic role as the first female major party nominee. They also said that Clinton's understanding of the electorate was wrong, saying they used a model that projected turn-out more akin to the 2014 midterm races, when Democratic turnout was low, than President Barack Obama's 2012 victory.

Clinton's team attributed their devastating defeat to a lot of factors — just a few self-inflicted. Aides argued that FBI director James Comey's investigation, media coverage, the hacking of Democratic email accounts, gender bias and even Clinton's personal penchant for privacy and policy were to blame for her defeat. They accused Trump's team of peddling lies on social media and alt-right websites.

"I don't think you guys give yourself enough credit for the negative campaign you ran," said strategist Mandy Grunwald, pointing to Trump's historic negative ratings and his team's trafficking in conservative media. "There was a very impressive gassing of her."

Palmieri said her only strategic regret was not pushing for a fourth debate, arguing that Clinton was strongest when she faced off on a stage with Trump. Mook admitted he regretted not putting more staff in Michigan, a state her team lost narrowly. But said Grunwald, dismissing many of the post-game analysis, "it's all theoretic."

Strategists on both sides of the aisle were struggling with a big question in the post-Trump world: Do the time-worn tactics of political campaigns still apply? Trump won, according to his aides, not by issuing serious policy plans or establishing an extensive political machine but through "branding."

Clinton's campaign, saddled with a policy wonk candidate, felt penalized for playing by the old rules. "This was the first sort of post-factual campaign and I think you were punished for telling the truth and being true to nuance," Mook said.

This content is created and maintained by a third party, and imported onto this page to help users provide their email addresses. You may be able to find more information about this and similar content at piano.io
Advertisement - Continue Reading Below
More From Politics
Trump Nominates Amy Coney Barrett to Supreme Court
Cecile Richards on Mobilizing Women to Vote
Advertisement - Continue Reading Below
Amy Coney Barrett Is Poised to Be a SCOTUS Nominee
The Best Way to Honor RBG Is With Your Vote
In Maine, Sara Gideon Could Help Flip the Senate
Flight and Fight
How to Help Demand Justice for Breonna Taylor
Your Guide to the 2020 Presidential Debates
Inside Sarah McBride's Historic State Senate Run
You Can Now Wistfully Text Obama "I Miss U"