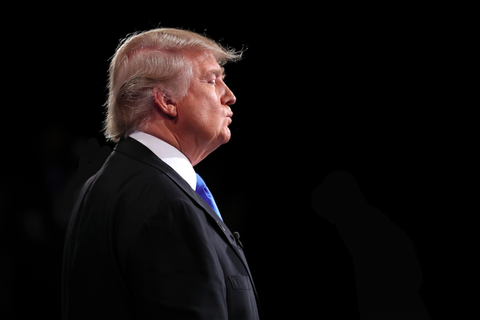 Today, on Inauguration Day, Donald Trump will take an oath to become the 45th President of the United States of America. And tomorrow, on January 21, 2016, more than 1 million people will join the Women's March on Washington and in cities around the globe as an oath of a different sort—a pledge to fight for justice and freedom and equality, for all that President-elect Trump has shown every indication of threatening.

I will be proudly marching with them, but you don't have to physically be there to take this oath. You just have to affirm that you're on the side of America's best hopes and aspirations—our never-quite-achieved but constantly alluring promise to be a shining beacon of freedom and justice and equality, which we have increasingly come to understand includes not only straight white Christian men fleeing British tyranny but women and former slaves and new immigrants and Jews and Muslims and the LGBT community.

"are you prepared to interrupt the wheels of grave injustice if President Trump puts them into motion?"

Those aspirations—our sense of shared potential for progress—may have taken a hit in this last election, but make no mistake about it: That vision for America remains as important as ever. Will you take your own oath to help defend it?

To be clear, I'm not just talking about what you post on Snapchat or Instagram. I'm talking about real, concrete action. Do you believe so much in the equal dignity of your fellow human beings that you will make personal sacrifices to fight for what's right?

For much of the past few decades of American history, for the vast majority of people, supporting social movements has been a conceptual act—maybe joining a march or two, perhaps a boycott. But in moments of true injustice, true bravery is required. If President Trump starts deporting 11 million of our undocumented brothers and sisters, as he has promised, what are you going to do about it? If President Trump requires all Muslims in America to register with the government so that they can be more easily monitored, as he has also promised, what are you going to do to stop him? How are you prepared to use your voice, your mind, your resources, and your body to interrupt the wheels of grave injustice if President Trump puts them into motion?

Of course no one wants it to come to this. We're all holding our breath hoping that President Trump will not be the horrific tyrant he campaigned as, that perhaps he'll realize the majority of people did not vote for him and so perhaps he should tone down his rhetoric and hatefulness and find ways to appeal to the country he now governs as a whole.

This is a nice wish. But it increasingly seems like a fantasy. Trump has appointed extremist right-wing ideologues to nearly every one of his cabinet posts and cheered on Congressional Republicans in their efforts to repeal the Affordable Care Act and defund Planned Parenthood. He shows every sign of wanting to contort the levers of government to benefit billionaires and Vladamir Putin at a mounting cost to the rest of us.

We can continue to hope for the best from a Trump presidency, but we must prepare for the worst.

I recently did an interview with a right-wing media outlet in which the host asked me why the LGBT community was worried about Trump. After all, Trump hadn't made Republican anti-LGBT policies and rhetoric the centerpiece of his campaign, and Trump had actually made some fairly pro-LGBT statements here and there. So what was our problem?

As Dr. Martin Luther King, Jr. said, "No one is free until we are all free." And though we have made progress since Dr. King graced this earth, that progress has been not only slow and imperfect, but hard fought. Women's access to contraception, voting rights for African Americans, the eradication of laws that criminalized gay sex—it took brutal battles to win these and it may take a brutal battle to protect them. The existence of any given right today does not ensure its protection tomorrow. Freedom is an endless struggle.

The truth is that America is already great, and if we want to protect what's great and make America even greater—for all of us—we have to be willing to give the very best of ourselves to protect the most sacred of our values. That's the oath I hope we'll all take together today.

If you're like me, you'll be crying and whining and tweeting and drinking until the wee hours of the morning. But tomorrow, join the Women's March on Washington in whatever way you can.

And then don't let your activism end there. Pledge to make this just the beginning.