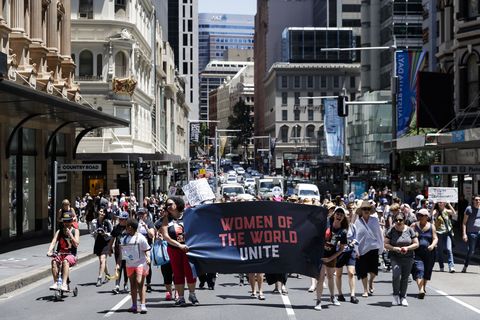 The Women's March on Washington—taking place this Saturday, the day after Donald Trump's presidential inauguration—has been getting lots of attention for the megawatt stars and gigantic crowds promised in the nation's capital. But you don't have to travel to D.C. to make your voice heard.

According to a statement from march organizers, there are a whopping 616 "sister marches" taking place the same day. There are marches in all 50 states, several U.S. territories, and 57 countries on six continents. And RSVPs indicate that more than 1 million people will participate all around the world.

The Women's March website has a directory of marches, which are conveniently mapped out, so you can just enter your ZIP code to figure out the nearest gathering. Some of the more remote locations include Madagascar, The Azores islands off Portugal, and even in the small town of North West River, Canada, which is having a march and snowshoe in solidarity.

According to The Huffington Post, each march will have its own regional changes. For example, the march in Maui, Hawaii, will feature a traditional blessing and a moment of silence. And there will be a march in Alabama that starts at the 16th Baptist Church, an important monument in the civil rights movement. Deadline reports that Chelsea Handler has organized a march in Park City, Utah, to coincide with the annual Sundance Film Festival; that march will feature speakers like Aisha Tyler, Jessica Williams, and Connie Britton.

Overall, the biggest non-Washington marches are set to be in New York, Los Angeles, Chicago, Seattle, and Portland, among other major U.S. cities. But that doesn't mean you can't demonstrate if you live in a small town or remote area. "If you are not able to make it to D.C., I will say that you're still creating the same kind of change, and you're making sure your voice is heard," national sister march spokesperson Yordanos Eyoel told The Huffington Post. "It's important to do that within the community where you live."