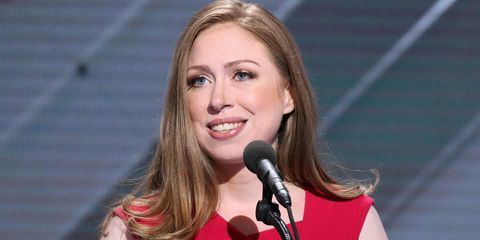 "I bet it's brand new information to people that President Obama had a six-month ban on the Iraqi refugee program after two Iraqis came here to this country, were radicalized and they were the masterminds behind the Bowling Green Massacre," Conway said during an interview with MSNBC's Chris Matthews. "Most people don't know that because it didn't get covered." It's weird how events that aren't happening seldom get covered.

Chelsea Clinton is as done with this nonsense as the rest of us, and hit out at Conway's lie in a tweet that simultaneously acknowledged the actual knife attack that took place at the Louvre this morning.

Very grateful no one seriously hurt in the Louvre attack ...or the (completely fake) Bowling Green Massacre. Please don't make up attacks.

Doesn't seem like too much to ask from the staff of the highest office in the land.

Emma Dibdin Emma Dibdin is a freelance writer based in Los Angeles who writes about culture, mental health, and true crime.
This content is created and maintained by a third party, and imported onto this page to help users provide their email addresses. You may be able to find more information about this and similar content at piano.io
Advertisement - Continue Reading Below
More From Politics
How to Demand Justice for Adam Toledo
Daunte Wright's Death Sparks Protest in Minnesota
Advertisement - Continue Reading Below
41 Surprising Rules First Ladies Have to Follow
Asian American Women on Where to Go From Here
Syrian Journalists Reflect on a Decade of War
How to Show Your Support for the AAPI Community
Activist Lydia X. Z. Brown on Disability Justice
Elisa Crespo: "I'm Not Here to Make History"
What We Know About the Georgia Spa Shootings
Dianne Morales Has Never Listened to the Naysayers