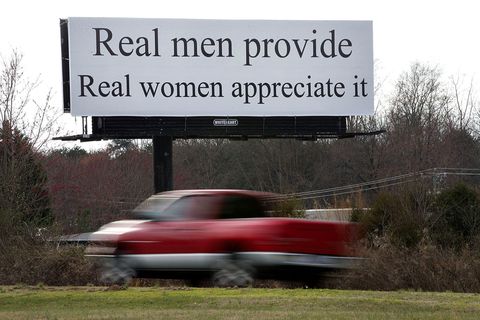 Women are planning this weekend to protest a North Carolina billboard with a message they say is a slam on gender equality, according to media reports.

A billboard on a highway between Winston-Salem and Greensboro reads, "Real men provide. Real women appreciate it." It's on Business 40, a heavily traveled commuter stretch of an offshoot of Interstate 40 that runs between the two cities.

Winston-Salem boutique owner Molly Grace said that she sees the sign's message as an attempt to silence women who want to be seen as equals to men.

"It's absolutely, absolutely insulting to single mothers, to women who have careers whether they are small careers or big careers," Grace said.

Via social media, Grace is organizing a peaceful protest at the billboard on Sunday to speak out against its message.

The message's origins remain a mystery. The billboard belongs to Whiteheart Outdoor Advertising, and owner Bill Whiteheart says the organization that bought the space doesn't wish to be identified.

But, Whiteheart told news outlets, an announcement is coming. He did not elaborate. The group has leased the space for 30 days but could stay there longer if they choose to renew.