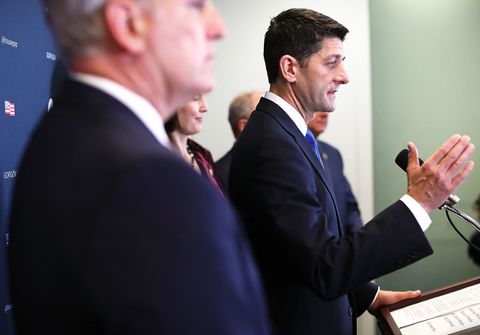 House committees planned to begin voting on the 123-page legislation Wednesday, launching what could be the year's defining battle in Congress.

GOP success is by no means a slam dunk. In perhaps their riskiest political gamble, the plan is expected to cover fewer than the 20 million people insured under Obama's overhaul, including many residents of states carried by President Donald Trump in November's election.

Republicans said they don't have official estimates on those figures yet. But aides from both parties and nonpartisan analysts have said they expect coverage numbers to be lower.

The plan would repeal the statute's unpopular fines on people who don't carry health insurance. It would replace income-based premium subsidies in the law with age-based ones that may not provide as much assistance to people with low incomes. The payments would phase out for higher-earning people.

The proposal would continue the expansion of Medicaid to additional low-earning Americans until 2020. After that, states adding Medicaid recipients would no longer receive the additional federal funds Obama's law has provided.

More significantly, Republicans would overhaul the federal-state Medicaid program, changing its open-ended federal financing to a limit based on enrollment and costs in each state.

A series of tax increases on higher-earning people, the insurance industry and others used to finance the Obama overhaul's coverage expansion would be repealed as of 2018.

In a last-minute change to satisfy conservative lawmakers, business and unions, Republicans dropped a plan pushed by House Speaker Paul Ryan to impose a first-ever tax on the most generous employer-provided health plans.

Popular consumer protections in the Obama law would be retained, such as insurance safeguards for people with pre-existing medical problems, and parents' ability to keep young adult children on their insurance until age 26.