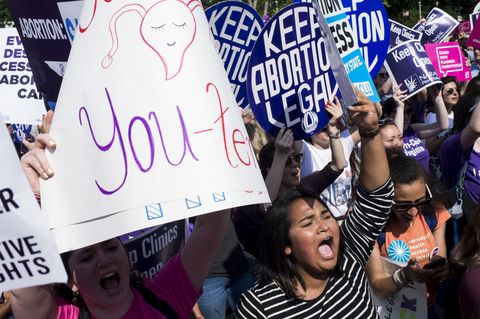 Update, 3/21: SB25, the bill that would allow doctors to withhold information about fetal status from expectant mothers and prevent parents from suing the healthcare provider later, passed the Texas Senate today. In protest, a group of women wore Handmaid's Tale costumes in the galley of the Texas Statehouse during debate on this bill and others yesterday.

The final vote was 21-9, split largely along party lines. The bill now moves to the Texas House.

Original Post, 3/10: A bill that would let doctors lie to their patients could soon be law in Texas. The bill, SB25, would allow doctors to withhold information from pregnant women about fetal deformities or disabilities. What's more, it prevents the women from suing their doctor for lying to them.

The author of the bill, state Senator Brandon Creighton, says the current law suggests there are "wrongful births" and discriminates against children with disabilities. But the real purpose of the bill is to inhibit women from considering an abortion if the fetus has a disability.

"We shouldn't have to stand up and say that it shouldn't be policy for the state of Texas to excuse doctors from lying to their patients, and that is what this bill does," said Blake Rocap, legislative director for NARAL Pro-Choice Texas, according to the Texas Tribune.

The bill effectively prevents women from choosing abortion on the basis of fetal anomaly.

But proponents of SB25 say that the bill is being taken out of context to create drama. Jennifer Allmon, executive director of the Texas Catholic Conferences of Bishops, said the bill does not restrict access to abortion, CNN reported. She added: "We believe that a lawsuit that begins as its premise that we should have had an opportunity to kill our disabled child sends a terrible message to those disabled children in Texas."

This isn't Senator Creighton's first time dealing with an abortion bill. He voted in support of a 20-week abortion ban in 2013 as a member of the state House of Representatives. Creighton has also voted against an "equal pay for women" measure, and, strangely, against a bill that banned texting whle driving.

Despite a controversial and emotionally charged public hearing, SB25 passed the Texas Senate Committee on State Affairs with an 8-0 vote. It will be advanced to the full Senate soon.