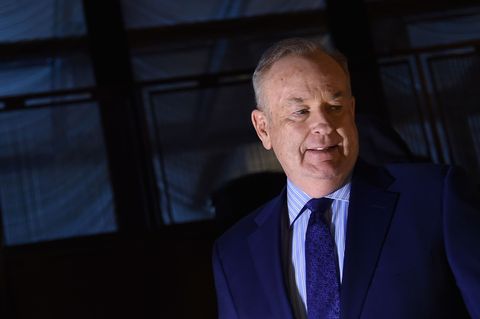 Update 4/19: Bill O'Reilly has released a statement to the media in response to 21st Century Fox's announcement of his departure:

BREAKING: Statement from Bill O'Reilly, who is currently on a plane back from Italy >> pic.twitter.com/UCnUjNQSrS

Original Story 4/19: Bill O'Reilly, the host of the popular Fox News show The O'Reilly Factor, is out at the network after a string of sexual harassment allegations, Fox announced Wednesday. The decision comes after a New York Times investigation claimed that the network stood by O'Reilly despite multiple allegations of sexual harassment; the report alleged the network and O'Reilly reached settlements with five accusers that added up to $13 million. After that report came out, dozens of advertisers publicly dropped their support for his show. O'Reilly has consistently denied the allegations.

"After a thorough and careful review of the allegations, the Company and Bill O'Reilly have agreed that Bill O'Reilly will not be returning to the Fox News Channel."

In a note to Fox employees, Rupert Murdoch and his sons, Lachlan and James, elaborated on the brief statement, praised O'Reilly's success, and ultimately stressed how important an appropriate workplace environment is.

"This decision follows an extensive review done in collaboration with outside counsel. By ratings standards, Bill O'Reilly is one of the most accomplished TV personalities in the history of cable news. In fact, his success by any measure is indisputable. Fox News has demonstrated again and again the strength of its talent bench. We have full confidence the network will continue to be a powerhouse in cable news. Lastly, and most importantly, we want to underscore our consistent commitment to fostering a work environment built on the values of trust and respect."

According to the Los Angeles Times, O'Reilly was by far the biggest star on Fox News, and Nielsen calculated 3.98 million people tuned in every night. Carlson was second in the ratings in the first quarter of 2017, with 3.27 million viewers. Losing The O'Reilly Factor could lower Fox News' ratings by as much as 25 percent, the newspaper estimated.

O'Reilly's exit comes less than a year after longtime Fox News chairman Roger Ailes resigned from the network, following a string of allegations of sexual harassment. Former host Gretchen Carlson accused Ailes of firing her for refusing to have sex with him, and other accusations followed, according to The Guardian. Ailes insisted he fired Carlson because of low ratings, and denied the sexual harassment allegations.