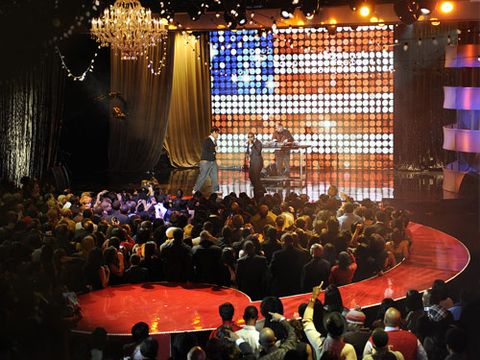 Even if the surfing's not that great on the Potomac and you won't see bikini-clad rollergirls on the Mall, D.C. is starting to resemble the land of sunshine and stars. Brangelina has been replaced by Obamichelle — just as stylish and even more powerful! — who hired Spielberg's decorator to overhaul the White House and an Alice Waters-endorsed locavore to prepare their wild salmon and winter vegetables. The District now has its own version of The Hills, with the CW's Blonde Charity Mafia currently in production. And, in perhaps their biggest homage to L.A., Washingtonians are feeling downright giddy about the future. More evidence:

An estimated 2 billion people globally watched our new president take the oath; the Oscars strain to get half that.

Blame the 24-hour news channels adopting HD (and the unfounded rumors that C-SPAN will be switching over any day now), but cosmetic procedures are exploding inside the Beltway. "We've seen a 20 percent increase in Botox, fillers, and laser treatments," says dermatologist Dr. Eliot F. Battle Jr., whose Wisconsin Avenue practice has gone from a one-week to a three- to six-week wait for an appointment.

Since Tangysweet opened in Dupont Circle 10 months ago (selling Pinkberry-like yogurt, the tart, Asian-inspired treat Angelenos call "frozen heroin juice"), over a dozen fro-yo pushers have popped up around the city — with names like Iceberry, Yogiberry, and Caliyogurt.

In January, when star stylist Ted Gibson opened a flagship salon on Wisconsin Avenue, the priciest haircut in the city jumped to $950. (Previously, the most you could spend, even if you were John Edwards, was $500.)

And if you're wondering who's moving magazines these days, look no further than 1600 Pennsylvania Avenue: The now first couple's two Us Weekly covers last year well outsold Madonna and A-Rod, Jen Aniston and John Mayer, and Jessica Simpson and Tony Romo — while the cover of Vanity Fair's annual Hollywood issue featured not Angie, not Brad, but our new Celeb-in-Chief.