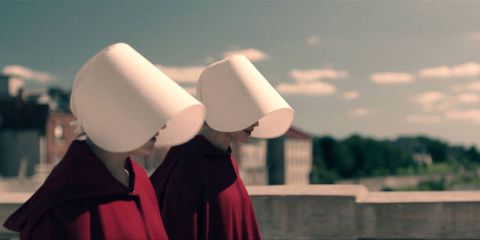 The Senate's new healthcare bill is 142 pages long and outlines Republicans' plan to replace the Affordable Care Act (known, colloquially, as Obamacare). As Quartz reports, however, there are some noteworthy omissions from the bill—like the word "women," which literally isn't used once.

The bill was drafted by 13 senators—all of whom were white, male, and Republican.

"We have no interest in playing the games of identity politics, that's not what this is about; it's about getting a job done," a GOP aide said in response to criticism about the makeup of the group. "We'll work with any member of any background who wants to pass a health reform bill that will reduce premiums and take away the burdens that Obamacare inflicted...To reduce this to gender, race or geography misses the more important point of the diverse segments of the conference the group represents on policy—from members who support Medicaid expansion, to those opposed to it, to those who have called for long term full repeal."

While the word "woman" does appear a handful of times (three, to be exact) in the bill, it's only in relation to abortion and state's abilities to require Medicaid recipients to be working in order to receive "medical assistance" from the government (pregnant women and women who have given birth in the last 60 days would be exempt from such work requirements).

Furthermore, as Quartz notes, the word "mother" appears in the bill only twice, with both mentions relating to abortion.

On page 8, the bill explicitly disqualifies any plan that provides abortions (except in limited, pre-approved circumstances) from coverage under the act:

Section 36B(c)(3)(A) of the Internal Revenue Code of 1986 is amended by inserting before the period at the end the following:''or a plan that includes coverage for abortions (other than any abortion necessary to save the life of the mother or any abortion with respect to a pregnancy that is the result of an act of rape or incest)''

Then, on page 9, "mother" gets another mention in a passage reiterating the definition of "qualified health plans" under the bill as not including those that cover most abortions:

The word "abortion," on the other hand, actually appears more than the words "woman," "women," and "mother" combined—11 times in total.

Senate Majority Leader Mitch McConnell is reportedly pressing for a vote on the bill as early as next week, according to CNN.

Kayleigh Roberts Kayleigh Roberts is the weekend editor at Marie Claire, covering celebrity and entertainment news, from actual royals like Kate Middleton and Meghan Markle to Hollywood royalty, like Katie Holmes and Chrissy Teigen.
This content is created and maintained by a third party, and imported onto this page to help users provide their email addresses. You may be able to find more information about this and similar content at piano.io
Advertisement - Continue Reading Below
More From Politics
Who Is Jen Psaki, Biden's Press Secretary?
The Fight for Menstrual Equity Continues in 2021
Advertisement - Continue Reading Below
Moving Forward: We Need Better, Not 'Normal'
Could This Be the Last Year of Roe v. Wade?
Meet the Next Presidential Pets, Major and Champ
Bernie Sanders at the Inauguration Is a Whole Mood
The Inaugural Concert Was a Cheesy Balm
Read VP Kamala Harris's Inauguration Speech
No, There Is No Inaugural Ball This Year
Kamala Harris Is "Momala" to Two Stepchildren