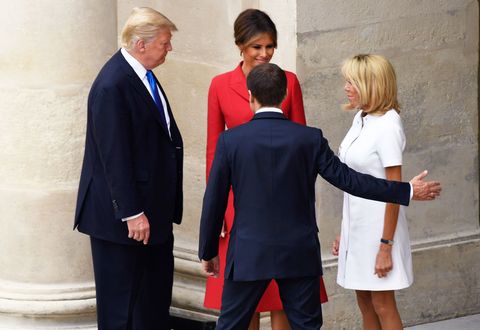 The first time President Trump met French President Emmanuel Macron, the handshake was incredibly awkward. It was more of a tug-of-war than a handshake, with Macron deftly holding his own against a president who seems to want to rip people's arms off rather than shake their hands.

And looks like things haven't gotten much better on that front. On Thursday, Donald and Melania greeted the Macrons as they arrived in Paris. And when President Trump greeted French first lady Brigitte Macron, it seemed like he really was trying to dislocate her arm for a weird moment there. Watch the video below to see the awkward exchange—it starts at 21 seconds in:

Naturally, Twitter couldn't look away from the train wreck.

And get this: it gets even more awkward than that. According to The Associated Press, Trump at one point turned to Brigitte and told her, "You're in such good shape." He then told her husband that, then turned back and said, "Beautiful." Not necessarily surprising coming from Trump, but there is not enough cringe in the world for this man.