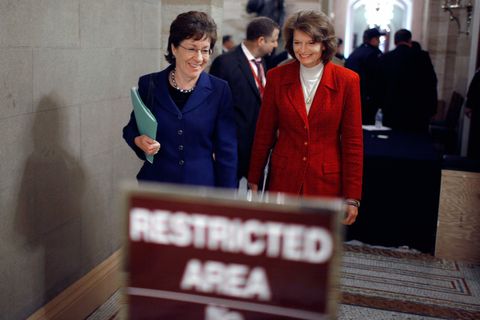 Last last night, the Senate voted against the "Skinny Repeal" of Obamacare by an extremely narrow margin—51-49.

While Sen. John McCain's deciding vote has dominated the headlines, he's not the only Republican senator who voted against the repeal. Senators Lisa Murkowski and Susan Collins also voted against the measure and it's worth noting that their votes were not a surprise; their opposition to the GOP's plans to repeal Obamacare has been persistent.

As Bustle reports, Murkowski and Collins have expressed specific concerns over proposed cuts to Medicaid and the impact the repeal would have on rural hospitals—and both have consistently opposed the GOP's attempts to defund Planned Parenthood.

The two women tweeted on July 25 explaining their positions on the bill:

"I've stated time and time again that one of the major failures of Obamacare was that it was rammed through Congress by Democrats on a strict party-line basis without a single Republican vote. We should not make the mistakes of the past."

And, of course, Donald Trump took to Twitter to weigh in on the decision as well.

While McCain's vote is historic and important, to ignore the role Collins and Murkowski played in blocking the skinny repeal is shortsighted at best. These women fought hard and put their constituents ahead of party politics—which exactly what elected officials are supposed to do. 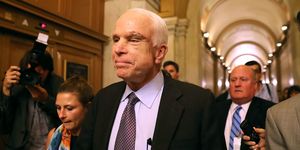 Kayleigh Roberts Kayleigh Roberts is the weekend editor at Marie Claire, covering celebrity and entertainment news, from actual royals like Kate Middleton and Meghan Markle to Hollywood royalty, like Katie Holmes and Chrissy Teigen.
This content is created and maintained by a third party, and imported onto this page to help users provide their email addresses. You may be able to find more information about this and similar content at piano.io
Advertisement - Continue Reading Below
More From Politics
41 Surprising Rules First Ladies Have to Follow
Asian American Women on Where to Go From Here
Advertisement - Continue Reading Below
Syrian Journalists Reflect on a Decade of War
How to Show Your Support for the AAPI Community
Activist Lydia X. Z. Brown on Disability Justice
Elisa Crespo: "I'm Not Here to Make History"
What We Know About the Georgia Spa Shootings
Dianne Morales Has Never Listened to the Naysayers
Stacey Abrams on Her Definition of Success
Grand New Party?