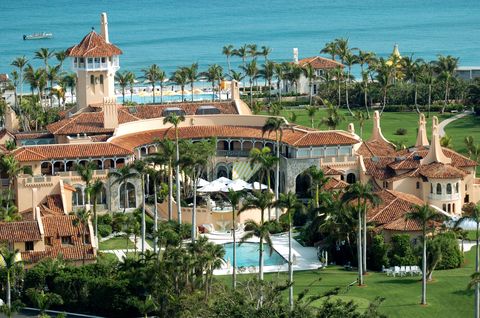 On Friday, the Salvation Army, the American Red Cross, and Susan G. Komen pulled out of planned events at the private venue, the Washington Post reports.

In total, fifteen charities have moved or canceled events planned at Mar-a-Lago for this coming season, which begins when the club reopens on Halloween.

On Thursday Laurel Baker, executive director of the Palm Beach Chamber of Commerce, called on organizations to "have a conscience" about Mar-a-Lago:

"If you have a conscience, you're really condoning bad behavior by continuing to be there. Many say it's the dollars (raised at the events) that count. Yes. But the integrity of any or organization rests on their sound decisions and stewardship. Personally, I do not feel that supporting him, directly or indirectly, speaks well of any organization."

The Cleveland Clinic said in a statement Thursday that it decided not to hold its annual event at his Palm Beach resort after "careful consideration" of a number of issues. It didn't elaborate, but the Ohio-based hospital was already under pressure to shift venues.

Doctors, nurses, and medical students affiliated with the hospital had signed a public letter earlier this year objecting to Mar-a-Lago as a venue for their benefit, given President Trump's plans to cut funding for medical research and other policies.

The Cleveland Clinic has held its annual fundraiser at the resort for eight years.

A few hours after the hospital pulled out, the American Cancer Society said it also planned to shift the venue of its annual fundraiser, called the 2018 Island of Palm Beach gala.

A spokesman for the American Red Cross said that it is canceling its annual gala at Mar-a-Lago because "it has increasingly become a source of controversy and pain for many of our volunteers, employees, and supporters."

The president has drawn widespread and bipartisan criticism for his comments at a Trump Tower news conference, during which he insisted that "both sides" were to blame for violence at a white nationalist rally in Charlottesville where a counterprotester was killed. The president dissolved two business councils after its members, who are prominent CEOs and business leaders, began to publicly resign. (Cleveland Clinic CEO Toby Cosgrove was a member of one of those panels, which was convened to advise the president on the economy and jobs.)

The gilded and glittering Mar-a-Lago has been a favorite spot for holding charity events and a money-maker for the Trump Organization. Dubbed the "Winter White House," it is one of the few places in the area that can hold a large crowd. Its 20,000 square-foot ballroom has massive archways and columns decorated in gold leaf.

Palm Beach town records showed that 21 charities held events at Mar-a-Lago between last November and April, during the active social season. The club reportedly earns between $100,000 and $275,000 for each event it hosts.

Below, courtesy of the Palm Beach Daily News, is the list as of press time of which organizations are in, out, and still deciding about hosting events at Mar-a-Lago next season:

Cleveland Clinic (moving to the Breakers)

Who We Have Yet to Hear From

With reporting by the Associated Press