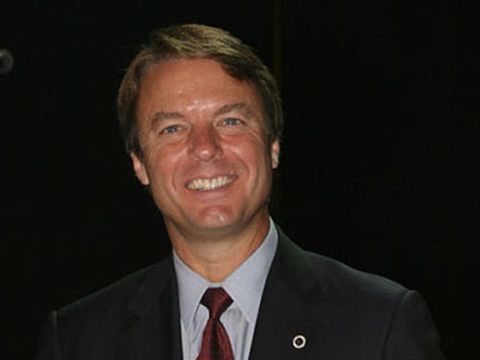 Q: Two of your opponents-Hillary Clinton and Barack Obama-are not your traditional candidates.

A: Right, a woman and an African- American.

A: [laughs] I think we want as many good people in the race as we can have.

A: Well, I haven't seen him in a while. Understand, he lives in Washington and Massachusetts. I live in North Carolina. Sometimes we talk on the phone.

A: I've learned a lot. Last time, I spent a lot of time thinking about how to be a good candidate. That's what I focused on. Now I spend each day thinking about what I want to do as president and the hard decisions that are going to have to be made in the Oval Office. It's a very different perspective.

A: I've been speaking at forums in Brussels, London, and the Middle East, and I've done humanitarian work in Africa with the International Rescue Committee. The rest of my time has been split between running the Center on Poverty at the University of North Car-o-lina and working on initiatives like the minimum wage. We went to six states-organized, raised money-to get the issue on the ballot. In all six states, the minimum wage was raised.

A: Yeah, but I think people are surprised to hear me speak now-I start with Iraq, then go to the genocide in Sudan, the spread of HIV/AIDS, global poverty. I talk about what I saw in Uganda, where there's been a civil war for 20 years. Terrible atrocities-a huge humanitarian crisis-and most Americans don't know about it.

Q: You've mentioned that you admire modesty, but you're running for president. What more hubristic act is there?

A: Let's deal with the honest truth: Any-body running for this office obviously must have a significant ego to believe they should be president of the United States. But is that the driving force? Or is it that you believe this is the best way for you to serve your country?

Q: How did you deal with your wife Elizabeth's cancer?

A: It was frightening. I took care of the mechanics and made sure she was seeing the right doctors. And I tried to be there for doctors' visits, for her scans. I went to every chemo treatment.

Q: And then you decided to run again.

A: I had to do some soul-searching. On a personal level, Elizabeth and I were worried about our children. Our oldest is fine. She's 24. But my younger children-they're 6 and 8. And I don't have to guess what it's like to run for president. I've done it. I know how much I'll be gone. I know the toll it takes on young children. I talked to my children incessantly about it. And I got mixed answers, to be honest. Emma Claire wanted me to run. Jack wanted to know what that meant about my going to his basketball game.

Q: In your book, you joke when you win a legal case your adversaries will say, "He won because of his hair." Will they say it if you become president?

A: I hope not! When Elizabeth was going through chemotherapy, she decided to cut her hair short-it was too hard psychologically to see it coming out. So Jack and I talked about it, then we went to Elizabeth and said we wanted to shave our heads, too. She [turned to me] and said, "It won't make me feel any better to look at you with your head shaved." So, you know, I left it alone.