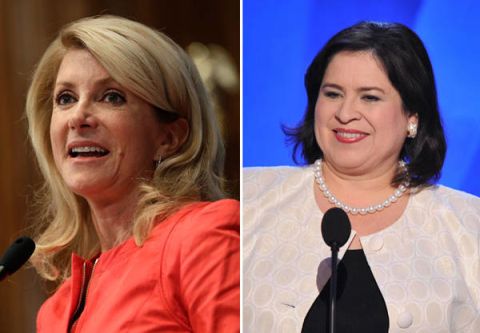 Even though we're more than two years away from our next presidential election — and the Hillary Clinton mania likely to ensue — 2014 is shaping up to be a critical year for women in politics. As Clinton's power base mobilizes, we'll see her almighty influence on the mid-term congressional races, while several woman-vs.-woman races are percolating and reproductive rights debates are energizing some particularly contentious contests. (Hi, Wendy Davis!) Here, our bipartisan list of women to watch this year:

She's our one-name rock star and our great hope of seeing a woman in the White House soon. After pulling off one of the biggest public-image turnarounds in history as President Obama's first-term Secretary of State, Hillary isn't yet officially in the running for 2016. But she could still exert major pull in the 2014 congressional races, thanks to her popularity and the pull of her power base, already organizing as Ready for Hillary.

Texas state Senator Wendy Davis made national news — and reproductive rights advocates' hearts go aflutter — when she filibustered for 11 hours against new abortion restrictions. (Gov. Rick Perry used a procedural loophole to sign them into law anyway.) Now Davis is running for the Democratic nomination to succeed Perry, and Van de Putte is gunning for Lieutenant Governor. (Van de Putte, you'll recall, is the one who showed up to Davis' filibuster from her father's funeral and asked, "At what point must a female senator raise her hand or her voice to be recognized over her male colleagues?") They offer a strong chance that two women will lead a major party's ticket for the first time in the state's history. And even though as Democrats, they still face an uphill battle in the conservative stronghold, their presence in the election guarantees all candidates will be paying more attention to female voters.

The Madison, Wisc., school board member and former state Secretary of Commerce is a frontrunner to nab the Democratic nomination for the state's governor race; if she gets it, she'll be challenging incumbent Scott Walker, who drew protests and national attention for his "Wisconsin Budget Repair Bill" limiting public employees' collective bargaining power. (He became the first U.S. governor to survive a recall election.) Burke is already attracting the backing of progressive groups like EMILY's List.

The former teacher is running to represent California's Central Valley in the House, a Democrat challenging the Republican incumbent. She was a staffer first for Senator Dianne Feinstein, and then, under Senator Debbie Stabenow, the first Latina chief of staff in Senate history. She turned down a position as chairman of the Commodity Futures Trading Commission to focus on her campaign.

This Democratic Pennsylvania congresswoman running for governor is strongly pro-choice and wrote several important portions of the controversial Affordable Care Act — including the ban on pre-existing condition exclusions and the extension of young adults' time on their parents' policies. She'll challenge Republican incumbent Tom Corbett in this year's race.

The Republican is New Mexico's first female governor and the first Hispanic woman to run a state — and this year, she was named one of Time's most influential people in the world. She's pushed for tough education reforms and budget cutbacks, including selling the state's luxury jet for $2.5 million. She's also earned one of the highest approval ratings in the country, never dropping below 60 percent, and she's been mentioned as a possible running mate for Chris Christie in 2016.

As an adviser to President Obama, Warren became the rare political household name during her appearances on The Daily Show, arguing forcefully for middle-class economic protections. Now that she's the Democratic senator from Massachusetts, she's continuing her fight with legislation, including a proposed law that would stop employers from rejecting applicants based on credit checks. Her national stature is so strong that many Washington-watchers are already wondering if she could challenge Hillary in 2016.

The newly appointed federal judge has been attacked as a "radical feminist" because of her involvement as a lawyer in cases like United States v. Virginia, which struck down the Virginia Military Institute's policies that discriminated against women. (She's been called "the next Ruth Bader Ginsburg"). Incidentally, though, she also argued for men's rights, representing a Nevada man who was fired for taking unpaid paternity leave. Her appointment helps shift the balance of power on the U.S. Court of Appeals for the D.C. Circuit after decades of Republican dominance.

A Democrat and the current Kentucky Secretary of State, Grimes is running for a Senate seat in a close race to unseat Minority Leader Mitch McConnell. The conservative incumbent's role in the government shutdowns has made him the least-popular senator in the country, but getting Kentucky to vote blue still isn't easy, meaning this race will be one of the hottest in the country. Celebrities like Leonardo DiCaprio and Cameron Diaz have donated hundreds of thousands of dollars to Grimes' campaign, despite her territory being thousands of miles from Hollywood.

The New York senator was appointed as Hillary Clinton's replacement in 2008, then won the seat in the 2012 election. She's risen to national prominence as a force behind the repeal of Don't Ask Don't Tell and the bill that helped 9/11 first responders get compensation for their subsequent health issues. More recently, she's fought to overhaul the way the military handles reports of sexual assault. She scored a victory in December when the Senate's defense bill included changes to the system, and she'll continue her fight to remove military sexual assault cases from the chain of command in 2014.

Tennant and Capito are running against each other to represent West Virginia in the Senate, making it one of a growing number of two-woman races in the country. Tenant, a former television reporter, is considered a key part of Democrats' plans to maintain control of the Senate. She's given Capito heat for her role in the government shutdown, though the incumbent still leads in public opinion polls so far.

Michigan's former Secretary of State represents the Republicans' best hope for recapturing the Senate seat being vacated by retiring Democrat Carl Levin. The unapologetic conservative, who has spoken out against the "Obamacare" health care laws, has gotten endorsements from Michigan Right-to-Life and the state's lieutenant governor, among others.

If elected, Mizeur, currently a state delegate, will be the first openly gay governor of Maryland. Before she can run, however, she will be up against two better known and better funded candidates in the Democratic primary. A clear progressive, she's spoken out in favor of pot legalization and marriage equality.

When she was elected California attorney general in 2010, Harris became the first woman, first African-American and first Indian-American to hold the office in the state. In the position, she's cracked down on hate crimes and negotiated a huge deal with mortgage lenders to help end the foreclosure crisis, and she's running for reelection in 2014. Though her name is best known nationally thanks to a gaffe from President Obama (he called her "by far the best-looking attorney general" at a 2013 fundraiser), she's becoming increasingly known as a front-runner to succeed California Governor Jerry Brown in 2018.

The mayor of Saratoga Springs, Utah, lost her 2012 bid for the House of Representatives, but she's running again in 2014. If elected, she'll be the first black female Republican in Congress and the first person of color to represent Utah —which makes her a standout hope for a party struggling to reach out women. "Any time I'm in front of that camera … I'm going to champion those conservative causes. I'm going to let people out there know that we exist, and that … there are conservative black Americans everywhere that believe in fiscal discipline, limited government, and personal responsibility," she told The Daily Caller. Democratic Rep. Jim Matheson's announcement that he won't run again makes her election seem even more likely.

Nunn, the CEO of volunteer organization Points of Light and daughter of former senator Sam Nunn, is running to represent Georgia in the Senate when the Republican incumbent, Saxby Chambliss, retires. Though she's a Democrat, she's gotten donations from some big Romney backers, business owners who appear to be responding to the recent government shutdowns precipitated by Tea Party Republicans.

Rhode Island Governor Lincoln Chafee's decision not to run for reelection left an opening on the Democratic ticket, and state treasurer Raimondo is one of the candidates trying to secure the spot. The former venture capitalist is known for her work on pension reform, and she has been a vocal supporter of same-sex marriage. Raimondo is another candidate backed by EMILY's list, and if elected, she would be Rhode Island's first female governor.